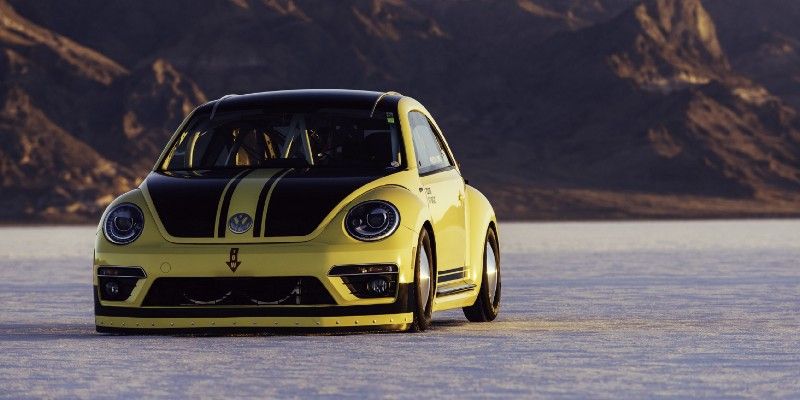 The Tesla Roadster may be regarded as the king of electric sprint cars, but a 1965 Volkswagen Beetle, modified to run on batteries, could show it a thing or two. The customized car, dubbed Black Current, has clinched a world record for covering 400 meters in less than 10 seconds.

The Volkswagen Beetle can often be a polarizing model of car. Many appreciate the timeless style and design which has helped the diminutive car receive icon status. Others feel the car is too small, not fast enough and just horrible to look at. It is all subjective and down to personal tastes, but one thing for sure is that the VW Beetle evokes some sort of reaction to anyone who sees one.

The Beetle is powered by a custom-built twinned series-wound DC motor, capable of producing more than 680 kW (900 hp). Its 378 V high-power battery pack consists of 540 lithium cobalt oxide (LiCoOâ) batteries. The main DC controller is capable of controlling bursts of up to 2 kA at 400 V. Acceleration is a great place to start, and Black Current can hit 0–60 in 1.5 seconds.

The electric dragster, which according to the Daily Mail uses parts from an old milk float, has a frankly terrifying 0–60 mph time of just 1.6 seconds, meaning it would leave far more exotic cars for dead in a straight line race. For reference, the Bugatti Veyron, widely regarded as the daddy of high-speed sports cars, achieves 0–60 mph in a sluggish 2.6 seconds.

Its maker, Olly Young, and his driver brother Sam, created this high-speed monstrosity at their workshop in Berkshire — the home of Charlie Brooker, Chesney Hawkes and Ali G. They fitted the car with an 80 kW motor, which drives the rear wheels, and hooked it up to 60 ,12 V, 50 C, 500 mAhr motorcycle batteries mounted under its front bonnet.