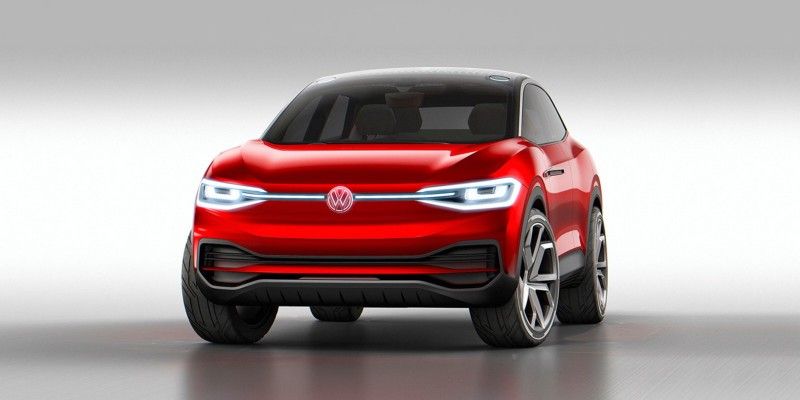 VW has announced that the ID Crozz electric coupe-SUV will go on sale in in 2020. It’ll be purely electric and will offer a zero-emission alternative to the Mercedes GLC Coupe and BMW X4,

The Crozz is powered by two electric motors, one for each axle. They produce a combined 302 horsepower, getting the little crossover up to a top speed of 112 mph. An 83-kilowatt-hour lithium-ion battery pack provides a claimed 311 miles of range, which is more compared to other EV. The Crozz is equipped for DC fast charging, allowing it to charge to 80 percent in around 30 minutes.

Crozz also features a fully autonomous driving mode called “I.D. Pilot,” which is activated by pressing the Volkswagen logo on the steering wheel. In this mode, the exterior lighting changes to indicate the car is in autonomous mode, and occupants can take full advantage of the tech-filled cabin, which includes a 10.2-inch tablet-style display on the instrument panel. When the Crozz is parked, delivery services can drop off packages in its trunk.

Styling of the ID Crozz will be a fairly large car with a tall front end and window line. It’s a coupe shape like the GLC Coupe and X4, but looks slightly less awkward. The bodywork is sharp, and the combination of black roof and small windows make it look lower and more like a conventional saloon.

The ID Crozz’s eye-catching front end gives us a hint of what the rest of VW’s electric ID range will look like as they go on sale over the next few years.. Unlike the electric Jaguar I-Pace, there aren’t many air intakes so it looks cleaner and is more noticeably an electric car, although the headlights and tail lights on the ID Crozz concept will be swapped for more conventional units when it goes into production. At the rear, the lights slash across the tailgate to make it look lower and wider, and naturally you won’t find an exhaust poking out the rear bumper.

On the interior, the futuristic seats and immovable steering wheel aren’t going to make it to production, although the steering wheel will retract into the dashboard on the car that hits showrooms. While the acres of front legroom would be far more than any other car on sale, it’s likely that the ID Crozz will have a more conventional dashboard with physical climate control dials and more storage.

The sloping coupe-style roof will cut into rear headroom a bit, but thanks to the car’s small electric motors you’ll still get plenty of cabin space. A light and airy feeling will be helped by the almost full-length panoramic roof, which could be a cost option on the production car. When it goes on sale it’ll also have five seats instead of four, and the sliding doors will be swapped for cheaper, more conventionally opening ones.

Volkswagen plans to start production of its I.D. family of electric cars in 2020. The lineup will also include the I.D. hatchback, which will replace the e-Golf when it kicks off the offensive, and the retro-inspired I.D. Buzz, which will arrive in 2022. VW will begin production of the I.D. hatchback in November as well, but not in the U.S. The I.D. Buzz all-electric microbus should also be going into production soon given that it’s slated for delivery in 2022.