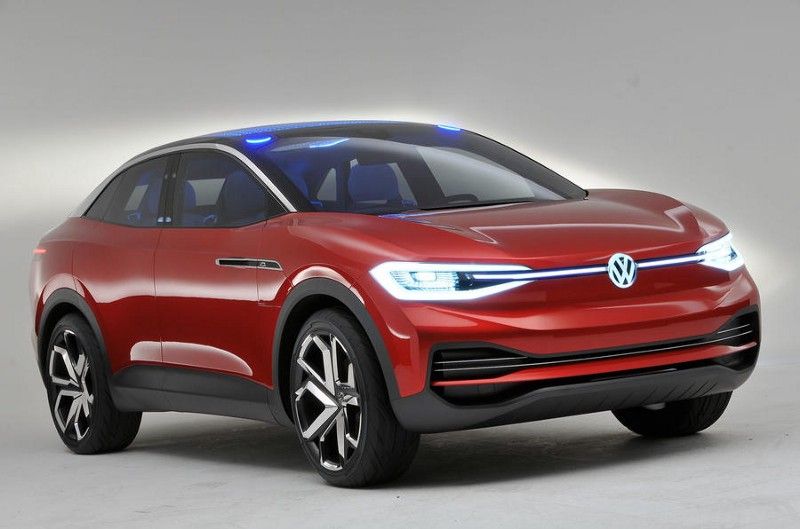 Volkswagen ID Electric Car is approximated to have over 300 miles of range . The car will be roughly the same size as a Golf but it likely to feel a little bit roomier inside due to the battery pack being mounted into the floor.

Inside the ID has roomy four seat offering accommodation similar to today’s larger Passat, as well as a comprehensive connectivity package. ID comes with zero-emissions capability with 125 kW electric motor mounted within the rear axle housing. The in-house developed unit drives the concept’s rear wheels via a fixed ratio gearbox. Although VW has a kerb weight for the first of its dedicated electric cars, the ID version is set to possess a 0–62 mph time of less than eight seconds and a top speed limited to 100 mph.

Like the Chevrolet Bolt, the I.D. is a tallish hatchback .The I.D.’s design features are eye like LED headlight surrounds that darken to near invisibility when the car is off then awaken when its turned on. The cluster of LEDs in their centers can selectively light up , even locking. Other lighting features include blue-back lit lower-body accents that pulsate when the I.D. is charging and white-lit door handles that can do a little jig when the vehicle is started.

Volkswagen’s Modular Electric Drive (MEB) platform sits beneath the I.D.’s body, which is designed from the outset as a battery-electric skateboard chassis. This dedicated EV platform allows the wheels to be pushed to the corners, leaving pleasantly short overhangs front and rear, and its rear-mounted electric motor affords greater room for the front wheels to turn more sharply than with a front-mounted powertrain. As a result, the I.D. has a turning circle of just 32.5 feet. The tiny Smart Fortwo still has it beat with its 22.8-foot turning radius, but the Volkswagen is more than four and a half feet longer and rides on a 108.3-inch wheelbase that is 4.5 inches longer than the Golf’s. The acceleration of this car is 0-60 mph time and a top speed of 99 mph. Volkswagen indicates that battery size and motor performance could be cranked up or down for better acceleration or additional range.

The battery pack does not matter since all will contain lithium ion cells and mounted in the floor. Charging can be handled via a typical plug connector and be able to recharge the car to 80 percent charge in 30 minutes.With an electric motor providing the car with 168 bhp, the ID has a range of 249–373 miles, surpassing the e-Golf which has a range of 186 miles.

By packaging its electric motor at the rear, VW has freed up space within the front section of the ID, endowing it with an impressively tight turning circle of just 9.9 meters therefore good driving in the urban roads.

When parked, the headlight graphic is designed to provide an impression of a closed eye. At start-up, the headlights blink and the graphic is altered to convey the action of an eye opening. At the same time, the VW logos front and rear are illuminated in white, while the lower section of the front bumper, side sills and rear diffuser are lit up in blue.

When drive is selected, the LED daytime driving lights are automatically switched on and the VW logos remain lit in white. In autonomous drive mode, a laser scanner deploys from the roof and the front bumper, side sills and rear diffuser are once again illuminated in blue. During recharging, the LED units pulsate in a simulation of the flow of energy being provided to the battery.