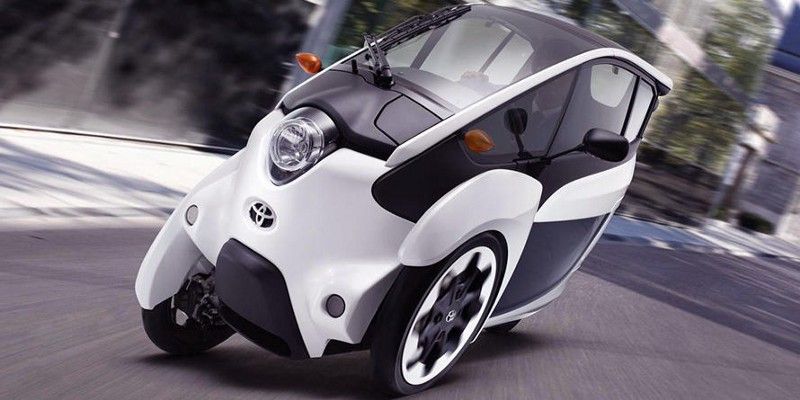 Toyota i-ROAD Is A City Car For You

The electric vehicle runs on a motor using electricity from an external charging supply as a power source. As it does not use gasoline, it generates zero CO2 emissions during operation. It is set to become an important part of the eco-car line-up that will lead the way into the future. To overcome the limited range which is a current issue, Toyota is engaged in tireless research and development to improve battery performance and advance related technologies.

The car is two seat three-wheeler, it tilts into bends while being steered from the rear by a tiny single wheel. Power comes from a pair of electric motors located within the front wheels.It has a range of just over 30 miles when driven with a bit of restraint, and 25 miles if you can’t resist extracting the most of its darting charms. It takes three hours to recharge.

The other vehicle, known as the COM, is a four-wheeler similar in concept to Renault’s Twizy.The i-Road, by contrast, looks very sexy indeed. Styled by Koji Fujita, this is the concept as it appeared at last year’s Geneva motor show, from its ’50s locomotive style Cyclops headlight to the slender casings that cap its tilting front wheels and the horizontal strip of its tail-lights. It’s less than 2.5 m long and rides on a 1700 mm wheelbase.

The ultra-compact size, just 870 mm in width, makes it easy to maneuver even in tight spaces. On congested city streets, the vehicle doesn’t take up the whole traffic lane, while parking is possible in one half to one quarter of the space of a regular vehicle.

The i-Road is 92.3 inches long, 57.3 inches tall, and 34.3 inches wide, or slightly fatter than a scooter and slimmer than a large motorcycle. It weighs 660 pounds, and within its closed canopy are two seats arranged fore and aft, the rear seat suitable for a small child or shopping bags. It has a center-mounted display showing necessary vehicle info, left-mounted push-button transmission controls, and manually operated side windows.

This vehicle has the convenience of a motorbike, yet requires no helmet, and offers the comfortable drive of a car, with no risk of getting wet on rainy days. As balance is automatically maintained by the vehicle and not the driver, it has a stable driving feel even on curves and slopes, making it possible for anyone to zip along with complete confidence.

The slender front wheels are jointed to a yoke system that allows them to tilt, while the rear wheel steers at a variable rate depending on your speed, turning more tightly for a given lock at lower speeds.

With two motors up front the i-Road needs quite a complex control system in order that they don’t fight each other in a straight line, besides enabling one to spin more slowly than the other in a turn. With only two kilowatts a piece to dispense. The i-Road’s weight has been critical, the three-wheeler weighing around 300 kg in concept form.

Weight-saving is why it does without a heating and ventilation system but there’s some weatherproofing, the upper glass sections of the three-quarter-height doors stopping a few inches short of the roof. The lower portions of the doors are glass too. This arrangement is sufficient to allow you to drive without a helmet, making the i-Road much more instant to use.