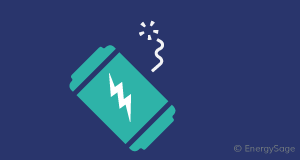 Electric vehicles are having a hard time to convince new customers. Apart from range issues and charging hassle, the fear of battery degradation during the life-cycle of the car definitely plays a part too.

Most OEMs work with lithium-ion batteries because they offer the best properties today.Automotive researcher Mark Pecqueur, explains that each battery is basically a crystalline structure. Each time you charge the battery, you add an electron or remove one from this structure. The fact that you actually modify the structure time and time again means you weaken it. You could compare it with bending a metal plate over and over again. At a given point, the plate will tear.

The current lithium-ion technology allows batteries to be charged between 1,000 and 1,500 times. “A car with a bigger battery will be affected less by degradation than a car with a smaller battery. A Tesla, for instance, can travel 300 km on a single charge. Even when it has 150,000 km on the odometer, the battery has only been charged 500 times. That leaves at least another 150.000 km for the battery to become degraded”, Pecqueur clarifies.

So the fact Tesla forums report that Model S cars lose less than 10 percent of their battery capacity after 160,000 km should not come as a big surprise. The battery can be repaired, incidentally. “Not all cells are broken when a battery has degraded to such an extent it can no longer serve as an energy source for cars. There are other scenarios than the ‘second life’ one, in which the battery is refurbished to become a static energy storage or buffer.

Management system play a major role in ensuring the battery lasts longer. The management takes into account the outside temperature, among other things, to avoid overloading the battery. “Some systems even monitor things on a cellular level, enabling a much more precise management, which leads to a longer life. Toyota and Tesla are absolute masters in this respect”; explains Fleet Europe expert.

Currently there are several alternatives to the current lithium ion technology, but they do not offer the same performance. Solid state batteries, too, are likely to rely on lithium ion. How fast we will see this on the market depends on the scalability of the technology. It requires new factories, and I can assure you: the current liquid lithium ion battery makers first need to earn back their investment before they will switch to solid.

Battery degradation is affected by how many charge cycles it's been put through, that is  how many times it's been charged. Cars with higher mileages will have been charged more, so the battery will have degraded more. The research done by Honest John reveals that the average Tesla Model S battery provides more than 90 per cent of its original range up until around 150,000 miles. After that, the range starts to noticeably drop off.

While the survey concentrates on the Model S, anecdotal evidence suggests batteries in other electric cars might last just as long as those in Tesla's. One HonestJohn.co.uk reader reported covering 160,000 miles in a Nissan Leaf over three years without an issue.

Generally, manufacturers advise that EV batteries are intended to last the lifespan of the car. Nissan, for example, provides an eight-year, 100,000-mile warranty for the battery in its Leaf, while the Hyundai Kona Electric comes with an eight year, 125,000-mile battery warranty. If the battery drops below a certain capacity in this time, the vehicle manufacturer says it will be replaced with a new one at no cost.