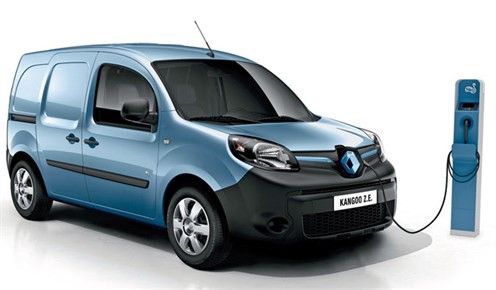 The Kangoo ZE has a number of advantages over a petrol or diesel vehicle. Firstly, it’s quiet. It also has excellent linear acceleration thanks to the 100% torque generated from standstill from its electric motor . It has no gears or clutch, meaning that it’s extremely easy to drive, especially in urban areas. Of course it has zero-tailpipe emissions at all times, obviously including when stopped in the many traffic jams in cities — which is in contrast to most other vehicles which will continue to pump out pollution. Even modern cars with stop-start systems have an uncivilized mechanical intervention to get you moving again, something that’s certainly not a feature of the refined Kangoo ZE powertrain.

It’s also a very efficient vehicle, much more so than one with an internal combustion engine, as an electric motor has an efficiency rating of 90%. In contrast, a petrol engine only has an energy efficiency rating of 25%. In other words out of 10 kWh of energy, 9 kWh are transmitted to the road with an electric vehicle, compared to only 2.5 with a petrol vehicle. The range is 170 miles and top speed of 81 mph.

Although the Kangoo ZE is based on the same Kangoo van that is powered by an internal combustion engine, the battery is underneath the zero-emission version, so it has a low centre of gravity, and the battery doesn’t encroach into the load bay. The steering also feels sharper than that in the electric Fluence saloon.

The Kangoo van ZE feels nippy despite the official figures suggesting otherwise. It only has 60 hp (44 Kw) of power, using the same motor that is in the Fluence, and it takes 21.9 seconds to accelerate from 0–62 mph, with a maximum speed of 81 mph. The battery weight of 260 kg can’t help with the acceleration figures, but the 226 Nm of torque certainly makes it feel faster.

On the road, the new Renault Kangoo Z.E. is the ideal van for city driving. Turn the key in the ignition and it’s hard to notice the 44kW electric motor come to life. It’s then simply a case of sliding the automatic gearbox into drive, releasing the handbrake and off you go.

Driving around town is effortless, with the engaging steering helping navigate around tight bends with ease and the cushioned ride soaking up bumps and potholes without too much drama. The lack of any engine noise, bar the gentle hum of the electric motor, can accentuate any rattles and creaks from around the cabin, but on the whole city driving is a relaxing experience.

The interior is modern and there’s a simple and functional gear selector rather than the old fashioned-looking automatic transmission selector in the Fluence. The exterior also looks modern, although there’s very little to differentiate the electric van from the conventionally-powered version.