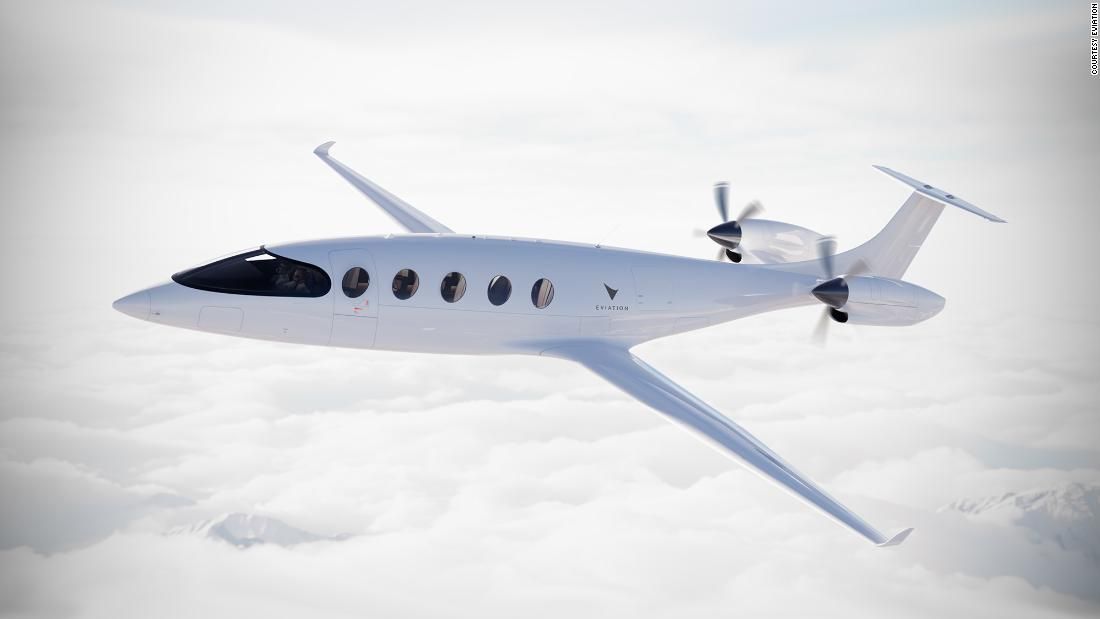 Alice, the first all-electric passenger aircraft prepares to take flight. It is the world's first electric plane.  The plane developed by Israeli company Aviation went through engine testing at Arlington Municipal Airport north of Seattle. According to Aviation CEO Omer Bar-Yohay, Alice is just weeks away from its first flight.
Battery technology is similar to that of an electric car or cell phone and after 30 minutes of charging, the nine-passenger Alice will be able to fly for one hour, and about 440 nautical miles. The plane has a max cruise speed of 250 knots or 287 miles per hour. Comparing it with a  Boeing 737 has a max cruise speed of 588 miles per hour. The company, focused exclusively on electric air travel, hopes that electric planes that can fit 20 to 40 passengers will be a reality in seven to 10 years.

In 2019 a prototype aircraft was developed and has been going through low-speed taxi tests since December and will attempt a high-speed taxi test in the next few weeks. In these tests, the aircraft is sent down the runway at different speeds to test its power and allow ground teams to monitor systems like steering, braking, and anti-skid. The company initially aimed for Alice to take flight before 2022, bad weather conditions in the Pacific Northwest at the end of the year hindered testing.

Aviation has developed three versions of the prototype: a "commuter" variant, an executive version, and one specialized for cargo. The commuter configuration in testing holds nine passengers and two pilots, as well as 850 pounds of cargo. The executive design has six passenger seats for a more spacious flight, and the cargo plane holds 450 cubic feet of volume. All of this is possible while reducing maintenance and operating costs of commercial jets by up to 70%, according to the company.

All of this is possible while reducing maintenance and operating costs of commercial jets by up to 70%, according to the company.

The electric aviation space is already growing more crowded with both startups and established aviation companies. NASA gave $253 million in September 2021 to GE Aviation and magniX to bring the technology to US fleets by 2035. Boeing is investing $450 million in Wisk Aero, a company building an all-electric, autonomous, passenger aircraft, and Airbus has been working on its own electric aviation endeavors since 2010.

According to industry experts, the largest obstacle for electric aviation becoming the norm in passenger jets is the battery.

"The stumbling block is the battery technology just like with cars, but more so in airplanes. This is because, with airplanes, the concern is the weight," said Ross Aimer, CEO of Aero Consulting Experts. "As soon as we have better battery technology, which I suspect will be in two or three years, that's when all these electric airplanes will eventually come."

Twelve Alices are on order by international shipping company DHL, anticipated to be delivered in 2024. These planes, out of DHL Express's global fleet of more than 280 aircraft, are set to be used as cargo carriers making shorter distance trips. "Our aspiration is to make a substantial contribution in reducing our carbon footprint, and these advancements in fleet and technology will go a long way in achieving further carbon reductions," said Mike Parra, CEO of DHL Express America, in an interview with CNN Business.

Eviation has announced purchases of its proposed fleet by DHL and commuter airline CapeAir and says there are several more to be announced once Alice's first flight occurs. CapeAir's proposed fleet of Alices is expected to enter service in 2023 on routes connecting Boston, Martha's Vineyard, Nantucket, and Hyannis.

While we seem to be getting closer to battery-powered air travel for some functions, not everything is nearly ready to go. Cross-ocean flights and jumbo jets are still years beyond the current science, for one. But the most pressing concern for electric aviation is regulation. The FAA has yet to put forward any clear guidelines or regulatory framework for electric airplanes, which fall under the category of Advanced Air Mobility, though Eviation says it is actively working with the FAA to achieve certification for production by 2024. "Some certifications could require the FAA to issue special conditions or additional airworthiness criteria, depending on the type of project. Determining qualifications for these aircraft is an ongoing process," according to an FAA spokesperson.

Electric aviation proponents predict Alice and electric planes like it becoming as commonplace as any other means of transportation. "It integrates aviation into the fabric of transportation, of our commuter life. It does so while being sustainable, and through being economically viable," said Bar-Yohay. "Once we start seeing planes like this, the entire way we look at where we live, how we commute, how we go on vacation, will change. It will be a high-speed train without the rail."
But electric aircraft big enough to rival large passenger jets may still be a ways off.
"The first step would be to try these in a commuter market or charter market," said Aimer. "Then eventually, if that works well, you're going to have passenger jets. For that, we need Boeing or Airbus to come out with an actual electric airplane. I would see that in about 10 years."