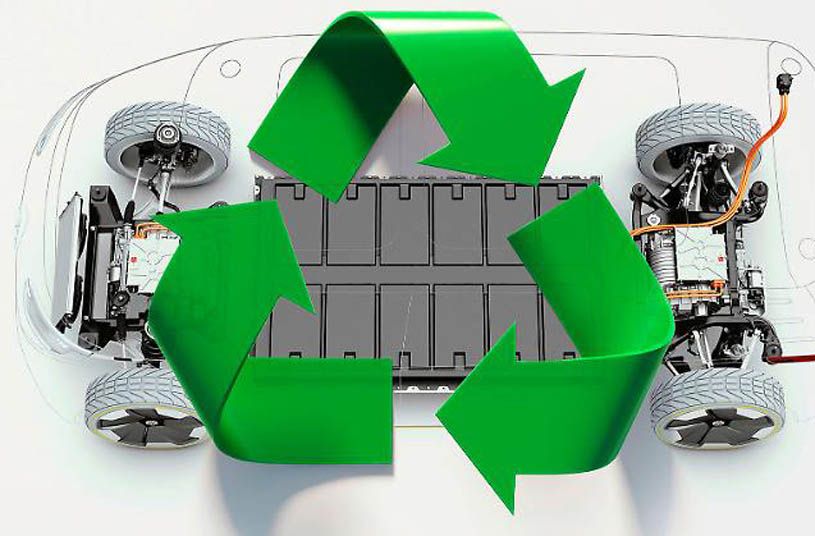 Startups ideas that can help in EV battery recycling.

Electric vehicles have now become mainstream ways of transportation with a good number of motorists shifting from traditional transport to electric. However, without changes to how the industry does business, the surge in EVs could eventually leave the planet awash in the batteries that make them run. Lithium-ion batteries already power phones, laptops, scooters, e-bikes, and toothbrushes. But global battery manufacturing is growing rapidly to serve the newly voracious demand for electric cars, which hit a record 8.6 percent of global new car sales in 2021.

Now that the growth trajectory is clear for battery-powered cars, the clean energy industry needs to figure out how to deal with the ensuing waste. Lithium-ion batteries contain materials that shouldn’t be dumped in a landfill, and old batteries can catch fire if they aren’t cared for properly. But so far, battery recycling technology and processing capacity have lagged far behind manufacturing.

It’s possible to pay someone to cart off old batteries and dispose of them as a hazardous waste stream. But this adds cost to the battery life cycle. That’s because traditional methods for breaking down batteries, including pyrometallurgy and hydrometallurgy, are expensive and time-consuming and don’t recapture all of the valuable material inside.

Pyrometallurgy involves chucking batteries into a furnace to burn off much of their content; the smoldering remains get sold to smelters that use the trace nickel and cobalt.

These methods don’t recover anything close to the amount of material needed to make a new battery, even though all the fixings for a new battery exist in an old battery. Old-school recycling facilities often don’t even reclaim the lithium because they just weren’t set up to do that.

Now, though, a number of startups are commercializing cleaner and more efficient recycling techniques, and building dedicated lithium-ion battery recycling factories at an unprecedented scale. Many of the founders come armed with the experience they gained from prior stints in battery manufacturing. And in just the last year or two, they’ve raised a boatload of cash from investors who sense an opportunity to make battery recycling profitable.

Recycling capacity has lagged behind battery production in part because it takes years of operating an EV before its battery pack needs disposal, and electric vehicles are still a pretty new mass-market trend. But this new cohort of recyclers doesn’t have to wait for electric vehicles to hit critical mass. They’ve got plenty to hone their techniques on with existing consumer electronics waste, plus the scrap from new battery manufacturing.

Here are some recycling startups:

i) Li-Cycle: Break down whole packs, recycle all the metals

Traditional battery recycling does not revolve around recovering the ingredients to make new batteries. In many cases, the goal is to pull out just the nickel and cobalt and forget the rest. When it comes to EV batteries, though, this approach means wasting the lithium, so a number of startups are experimenting with more thorough processes that allow them to extract this valuable mineral.

“Sometimes these things are obvious, but they just take time to develop and scale up,” Li-Cycle​’s Kochhar said. His company, which has more than 300 employees, opened a factory in Arizona in May that breaks down battery packs in a new efficient way.

“We don’t dismantle, we don’t discharge — our Arizona plant takes a full pack into the shredder,” Kochhar said. That shredding happens with batteries submerged in a solution to tamp down fire risk. The facility sifts out aluminum, copper, and plastics, which get recycled. That leaves a mishmash of battery materials known in the industry as ​“black mass.”

Li-Cycle will send black mass from Arizona and other ​“spoke” sites to a ​“hub” facility under construction in Rochester, New York. There the company will use hydrometallurgy to isolate the metals that can go into new batteries. Instead of trashing much of the recovered battery material and then wondering why recycling isn’t profitable, Li-Cycle tries to get everything out.

In the long term, Li-Cycle aspires to make recycled battery materials cheaper than the mined alternative.

Michael O’Kronley knew he could get more out of old batteries than the mixed metal slag that emerges from pyrometallurgy. And he wanted to get more than the commodity metals that conventional hydrometallurgy recovers from shredded battery parts.

The most expensive part of a new battery is the cathode. Today cathodes are made by mining and processing lithium and metals such as nickel, manganese, and cobalt. But an old battery contains all the necessary ingredients. It’s just a question of getting them out and back into a fresh, usable form.

iii) Redwood Materials: Use stored energy to power the recycling

Old batteries typically arrive at recycling facilities with some residual energy stored in them. Many recyclers then spend time and money emptying them of charge so their materials can be extracted safely.

Redwood Materials, the extremely well-funded startup led by Tesla co-founder and CTO JB Straubel, thinks that’s a waste. The Reno, Nevada company figured out a way to convert the stored electricity into heat for a low-temperature calcination process that extracts electrolytes from old battery cells.

This and a slew of other proprietary hydrometallurgy techniques pull out upward of 95 percent of the battery materials, said spokesperson Alexis Georgeson. Today, the company turns those materials into ​“battery intermediates,” the metals that go into new battery production. But the plan is to manufacture new copper foil, and eventually anode and cathode materials, in-house.

The costs of recycling start to accrue before old EV batteries even arrive at a facility. Used lithium-ion batteries are considered a hazardous material because especially worn-down batteries could catch fire. That designation imposes special protocols: Trains and planes can’t haul them, and truck drivers have to go through special training to handle them. That makes it more expensive to move old EV batteries from the field to a central recycling location.

KULR Technology Group helps shipping companies get around these limitations while remaining in compliance with the law. The startup earned a special permit last year from the Department of Transportation for its lightweight, fireproof carrying case. KULR designed the liquid-cooled carbon-fiber packaging for NASA so astronauts could store their lithium-ion laptop batteries without worry of a fire in outer space.

Now it’s available for use with terrestrial batteries of up to 2.1 kilowatt-hours. That’s a minuscule fraction of an electric vehicle battery, but useful for batteries used in consumer electronics and micro-mobility devices like scooters and e-bikes.

The company already helps battery manufacturers and recyclers like Retriev safeguard shipping for end-of-life units. The fireproof casing lowers the cost of transportation, both because it avoids the need for specialized training and because it’s more effective than status-quo shipping methods. Currently, spent batteries are shipped in a UL-certified cardboard box with fire retardant and thermal insulation, a legacy product designed for earlier generations of battery tech.

KULR is working to increase the capacity its envelopes can handle. If it can get certified for 10 kilowatt-hours, then it’s feasible to break down whole EV packs into modules that each fit in a fireproof case. For now, the company is chasing the massive number of smaller battery packs that are already circulating.

The World Economic Forum’s Global Battery Alliance (GBA) is a public-private collaboration of organizations that argue that a circular battery value chain is a key way of realizing the Paris Agreement’s 1.5C climate goal in the transport and power sectors.

The GBA also estimates that batteries could enable 30% of the required cuts in carbon emissions in the two industries to reach the 2° goal of the Paris Agreement. They could also provide 600 million people with access to electricity and create 10 million sustainable jobs worldwide – by 2030.

Its Battery Passport initiative seeks to create a digital representation of a battery that will provide consumers with a “quality seal” in terms of sustainability.

“The reason why we have such a challenge today with reusing a lot of batteries is actually that many of them were not made with the next stage of their life in mind,” Aceleron co-founder and CTO Carlton Cummings told The Telegraph.

Creating batteries that are easier to disassemble will encourage reuse and support a circular ecosystem, says Cummings. It will also create additional storage capacity as batteries could be repurposed to help store electricity at EV charging points.

i) Julian Spector (2022) EV battery recycling is costly. These 5 startups could change that