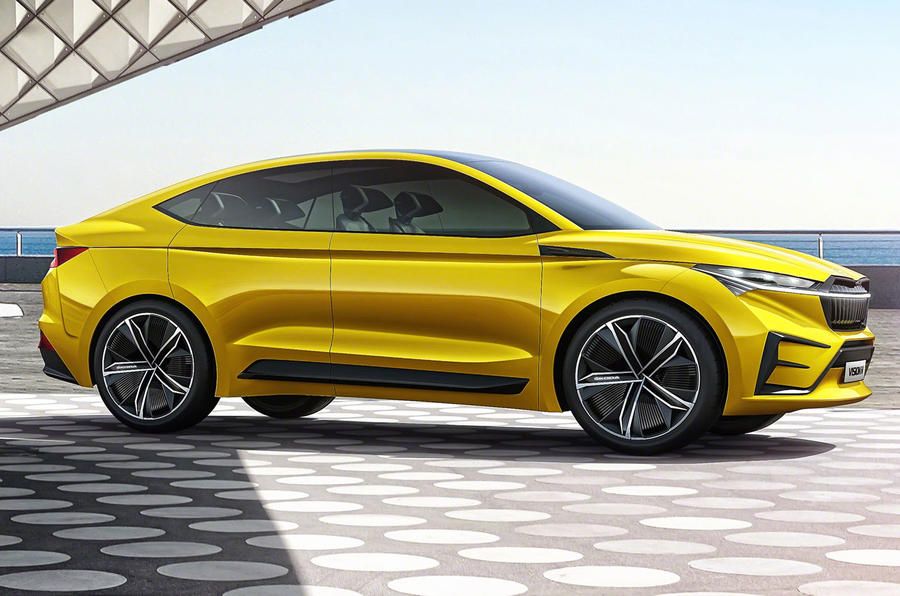 The name of this SUV is derived from the Irish name Enya, meaning 'source of life', the name continues the 'Q' theme of Škoda's existing combustion SUVs such as the Kamiq, Karoq and Kodiaq. The 'E' is also said to be a reference to electromobility.

The size of the car is  4.66 m long. The Kodiaq-sized four-door coupé crossover is  based on the VW Group’s MEB platform and uses a 302 bhp four-wheel-drive EV powertrain offering a 310-mile range and the ability to charge up to 80% in 30 minutes.

The Enyaq is roomier and feels airier than a Kia e-Niro or Kona Electric, easily fitting four six-foot adults distributed front and rear. Those in the back will have a centimetre or so of knee room to spare, decent headroom and lots of space for their feet under the front seats. If you’re a third, middle passenger, then you’ll enjoy a flat floor, but you’ll find your shoulders squeezed and, if you’re tall, a bulbous light fitting in the roof butting your head.

There is enough storage room for everyone, it comes with cubes and trays also the dual height centre console has storage top and bottom. There’s also a large glove-box, sizable door bins and a deep cavern under the front armrest. Rear-seat passengers also get good-sized door bins, picnic tables and a couple of cup holders that pop out from the centre armrest. There is enough space left on the floor for your EV charging cables.

The coupe-SUV's cabin shows a design that has moved on from current Škoda interiors, with a multi-level dashboard, large freestanding central screen, and minimalist look. It looks identical to the Vision iV and features a traditional slatted design rather than the Vision E. A full-width LED daytime running light sits underneath the main headlights, while the Škoda name at the rear is back-lit in red.

It comes with a 55 kWh battery and will cost around £40,000 (before any government grant). That gets you a single, 146 bhp motor which powers the rear wheels, and a range of around 211 miles. Next up is the 60. That has a 62 kWh battery capable of delivering 177 bhp at the motor and, potentially, 242 miles. But to travel the farthest you’ll need the 82 kWh battery in the 80, which should power you for up to 311 miles, with 201 bhp of poke to push you along. This is for a rear-wheel drive.

For a four-wheel  drive versions  it has 82 kWh battery with 262 bhp, called the 80X, or 302 bhp, which will be the sporty vRS model. Those hikes in power are courtesy of another motor driving the front wheels. Škoda is not competing with Tesla in terms of performance, however Škoda can hit 0-62 mph in over  6.0 sec and top out at 112 mph. Drive it carefully and Škoda claims both four-wheel-drive versions will give out 286 miles between charges, compared to Hyundai Kona which gives 278 miles. The vRS will be the most expensive Enyaq which will cost around £50,000.