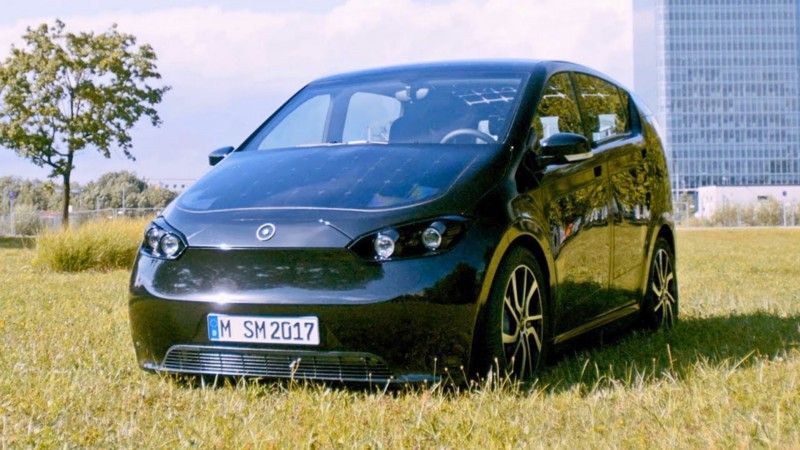 The Sion is equipped with both a battery pack, which can be charged like a regular electric car, and also a system of integrated solar cells that can charge the vehicle.

Adding solar to electric vehicles has so far been mostly superficial and was mainly used to power some auxiliary systems, like on the Fisker Karma and the Toyota Prius, but Sono claims that it adds up to 30 km per day.

Now Sono has revealed a production version of its electric hatchback, about the size of a Kia Soul, covered in more than a kilowatt of solar panels on the sides and the roof of the body that the company says can add about 21 miles of range per day (up from 18 with the original concept.)

That isn’t much, especially considering the panels can only generate that much power on a clear, sunny day in the summer, when the driver doesn’t park in the shade. Otherwise, the solar panels may add as little as 3 miles per day. Sono expects the average to be about 12 miles.

Even without that power, the car will offer a 35-kilowatt-hour battery that Sono says will give it a range of about 159 miles .

To take on range faster than the solar panels, the Sion will come with a 50-kw-capable CCS Combo fast-charge port as well as an 11 kw onboard charger. It even offers 7.6 kw of vehicle to grid charging so owners can use it to power their houses in the event of an outage, or to charge a friend’s car.

The motor will deliver about 161 horsepower and 214 pound-feet of torque and deliver a top speed of 87 mph.

The distinguishing characteristic of the exterior are the solar cells, whose full-surface integration completely redefines the body. The hood, fenders, sides, roof and rear of the vehicle carry solar cells that visually blend into the surface. The system is protected by a robust, scratch-resistant polymer.

Simply put, the Sion’s interior has been designed to be as clear and straightforward as possible. The cabin features our natural air-filter system, breSono, alongside the vehicle’s infotainment system that comes with a 10-inch display.

The dashboard’s cleanly structured and subtle design makes it easy for you to check up on all important information at once. There’s the speed and current charge level, and you also see a continuous display of how many extra kilometers your viSono system is generating, before they’re included in the total range display after 24 hours.

The Sion is the answer to all that is required of an electric car that needs to stand the test of everyday use: a range of 250 kilometers (255 kilometers under the WLTP standard), fast charging, a carefully designed interior, and an optional tow bar. The large trunk offers enough space to easily hold all your shopping.

viSono system is based on the idea of energy generation by the sun. Thanks to the solar cells fully integrated into the body, the Sion can easily charge its battery during the day through the power of the sun. The battery has a range of 250 kilometers and a capacity of 35 kWh. It also uses highly efficient, monocrystalline silicon cells for the solar cells. A total of 248 cells can generate a peak value of 1272 watts with an efficiency of 21 %. The modules are seamlessly integrated into the body.

Thanks to the bidirectional charging technology, the Sion can draw and store energy and moreover, share it too. A regular household electrical plug (SchuKo) can be used to power all common electronic devices up to 3.7 kW. The Sion can deliver even more power when using a Type 2 plug. You will then be able to power other electric cars and heavy duty devices with up to 11 kW. Combined with viSono, the Sion can be your power plant on wheels.

Sono has integrated a special moss into the dashboard for the breSono air-filtration system. It uses electrostatic gravitation to filter up to 20 percent of particulate matter out of the air, while providing positive effects for the temperature and humidity inside the Sion. You don’t even have to lift a finger. The moss takes care of itself.

Battery
The lithium ion battery has a capacity of 35 kWh, features water cooling, and has a range of 250 kilometers (255 kilometers under the WLTP standard).

Air Conditioning
The Sion’s standard equipment will feature air conditioning. Air conditioning does more than simply cool you down during summer. It also removes moisture from the air, helping demist your windshield in cold and wet weather, hence improving driving visibility.

Trailer Hitch
With a towing capacity of approximately 750 kg, it’s a breeze to tow smaller trailers. The 120 kW motor and single-speed transmission guarantee a good drive, even when the surface is uneven.

Safety
Safety is very important to . Therefore, the Sion comes with ABS brakes, alarm equipment, passenger and driver airbags as well as ESC.

Sono says the car will sell for about $28,675 with the 35-kwh battery pack, but buyers can opt to lease the pack instead for less up-front cost.