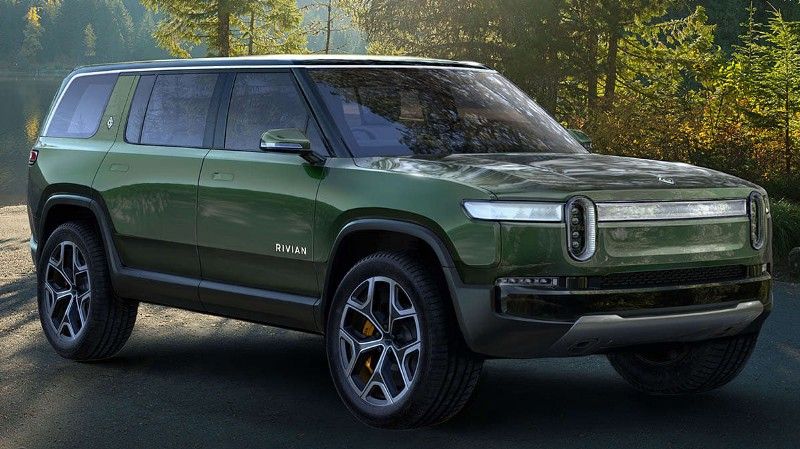 After the release of an electric pickup truck called the R1T — Michigan-based automotive startup Rivian is already following up with a second. Built on the same platform as the pickup, Rivian’s second vehicle will be a seven-passenger SUV in a style that sits somewhere between a Land Rover and Jeep’s more rugged offerings.

And just like the pickup, each wheel gets its own 147 kW electric motor for AWD, matched up to your choice of battery size. There’s a 180 kWh pack with an estimated 400 miles of range, and a 135 kWh battery with 300 miles of range. Later, a smaller 105 kWh battery will be offered which provides over 240 miles.

Due in late 2020, the R1S will be slightly more expensive than Rivian’s pickup truck when it goes on sale, with the base model starting at $72,500.

Other than its shape, the R1S (SUV) mostly matches the R1T pickup truck blow for blow. It will be available in three different battery pack configurations, with a 105 kWh version capable of about 240 miles of range, a 135 kWh variant that can last for around 310 miles, and a top-of-the-line option with 180 kWh of capacity, pushing the range over 410 miles. Those range estimates are each slightly higher than what Rivian expects its pickup truck to be able to get out of the same battery packs.

Rivian’s SUV will be just as fast as its pickup truck sibling, with the base model reaching 60 miles per hour in 4.9 seconds, and the two higher-spec models hitting that speed in just around three seconds. That’s because the SUV will have the same quad-motor layout as the pickup truck, meaning an electric motor will power each wheel for precise all-wheel drive performance. While the base model will have 400 horsepower, the 135 kWh version will have 750 horsepower. That number drops to 700 horsepower in the 180 kWh version of the R1S.

Inside the SUV, a 15.6-inch touchscreen takes up a huge portion of the dash, while a second, 12.3-inch screen sits behind the steering wheel. A third touchscreen, measuring 6.8 inches, is at the back of the center console, within reach of rear passengers. The R1S will also be outfitted with sensors capable of allowing the SUV to drive itself in certain situations,this is according to Rivian.

The R1S also has the same front trunk as the R1T, with 11.7 cubic feet (330 liters) of storage space, as well as a similar spare wheel-sized bin in the floor near the rear of the car. It doesn’t have the “gear tunnel” that Rivian’s pickup truck features, and also has less storage space under the seats compared to the R1T.

The interior features lots of wood elements mixed with sturdy fabric. Rivian’s pickup truck has a laser-focus on utility that puts it in a somewhat more specific niche than the startup’s SUV. The SUV is also going to face far more competition. Tesla is months away from unveiling the Model Y, a smaller successor to its luxury SUV, the Model X. Jaguar started production of its first all-electric SUV this year, the I-Pace, as did Audi with the e-tron. Mercedes-Benz showed off the all-electric EQC , which is also coming in 2020. Meanwhile, a number of Chinese companies big and small (like NIO, or SF Motors) are also making electric SUVs intended for multiple markets around the world. Others, like Byton, are moving down the same path.

But that’s not to say there’s no room for something like the R1S in the market, especially since SUV sales have gone through the roof in the last few years. What’s more, the Jeeps and Land Rovers of the world have moved far more slowly when it comes to electrifying their fleets.

There’s lots of connectivity as you’d expect, actual wood used in the interior, and many active safety systems all wrapped up into that striking body. While the R1T pickup is scheduled for 2020, this R1S isn’t due until the beginning of 2021.