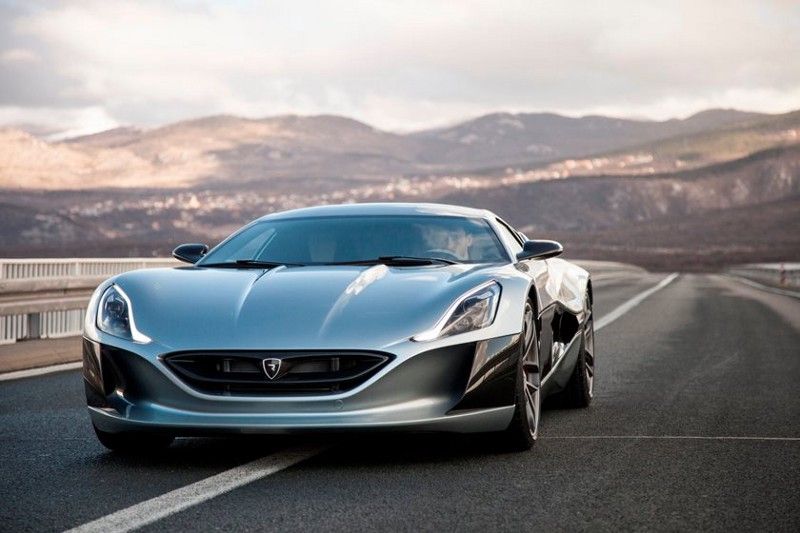 The Rimac Concept One is an ultra low volume 2 seater electric sports coupe, it has 4 electric motors one driving each wheel, with batteries mounted along the spine of the car and behind the rear bulkhead. Open the rear hatch and you’ll see a power distribution unit where you’d expect to see the engine in a mid-engined car making 1073 hp and 1180 lb-ft of torque. Acceleration claims 0–62 mph in just 2.6 seconds, while the top speed is 221 mph. Rimac claims a range of 200 miles in more sedate driving.

The interior is a completely bespoke design and the center console in particular looks futuristic, the in-house designed infotainment and control screen offers a multitude of functions and settings that obviates the need of physical buttons and switches.
There is space for two in the tight cabin and the seats offer superb lateral support, the fit and finish of the interior is very good for a very low volume product and it would have to be as it is competing at the very pointy end of the hyper car segment.Taller occupants will have trouble with the restricted headroom though. The rear hatch opens up to reveal the electric control unit and luggage space is limited to what you can store in the cabin and your pockets.

The lower geared transmission allows for speeds of up to 100 mph and helps keep the 0–60 mph time down to a claimed 2.5 seconds, the second gear helps keep the furious acceleration levels strong right up to the claimed 221 mph top speed. Its 120 kWh battery enables over 400 miles of range which is a lot more than the 200 miles found in most production EVs. And facial recognition technology will both unlock and start the car, which makes this car the perfect distillation of our current moment of technology and hype.

The four electric motors can be precisely controlled to deliver a range of dynamic behavior ,be it stable on road manners or ultra-agile high performance track driving. There’ll also be a drift mode in the near future.The car is built around a space frame chassis with double wishbone suspension and push rods all round. The steering is hydraulically assisted that is electric assistance would have been more efficient but it didn’t give the steering feel the engineers wanted and the tyres are Pirelli P Zeros.

The first thing you notice when you drop into the Concept One’s cabin is the headroom, or lack thereof. Anybody over 5 ft 10 will feel very cramped inside the cabin, while six footers will have to slouch heavily in the bucket seat just to find enough headroom to drive the car.The cabin itself is attractively designed and the quality is mostly good, albeit with a distinct low-volume, hand-built feel. The infotainment system is clear and easy to navigate.

The steering is heavy in its default mode but there is a lighter setting . There’s tension to the ride quality that works just fine on smoother roads, but on rougher sections the car does feel busy and unsettled.With 250 lb ft of torque being deployed through each front wheel the car has a habit of dragging itself across the road but on bumpier sections it becomes annoying to drive.

One of the car’s major dynamic weaknesses relates to its braking system more accurately, its three braking systems. The first is the kinetic energy recovery, which slows the car significantly when you lift off the throttle so you can ‘one pedal drive’ around town. The second system is the regenerative braking, which inverts the motors when you stand on the brake pedal to recharge the batteries, and the third is the conventional brake system, which uses carbon ceramic discs and six-piston calipers.

The kinetic energy recovery system can be turned right down, which is useful because it tends to disrupt your rhythm on a quick run. The bigger issue, though, is that marrying all three braking systems together to give a progressive, feel some and predictable brake pedal is close to impossible. As a result the Concept One can be a tricky car to have faith in when braking for a corner.

Under acceleration, however, the Concept One is remarkable. With so much torque available immediately it pulls phenomenally hard, without hesitation, and it actually accelerates with more force the longer you keep your foot in.

And then there’s the torque vectoring. The electronic super brain diverts more torque to the outside wheels than the inner wheels in the way into a corner, and actually applies negative torque to the inside rear. This pivots the car into the corner and makes it feel incredibly agile.

The computer then favors the outside rear wheel for maximum drive out of the corner. The Concept One feels incredibly positive away from corners with no hint of under or over steer, even if you apply full throttle much earlier than you think should be possible. That gives the car staggering pace on the road.

The Concept One does lack the soundtrack and the dramatic power delivery of a conventional super car, but in the way it accelerates and in the way its torque vectoring system picks apart a corner it is enormously entertaining to drive quickly.