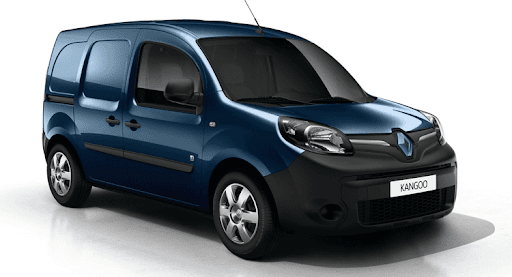 The Kangoo ZE mixes the van tech of the Kangoo compact van with the battery and electric motor from the Zoe, and what really sets it apart from its small electric van rivals is the number of variants that Renault offers. There are standard and Maxi van body lengths, but Renault also offers Crew Van and Crew Cab bodies. The last two have a second row of seats in the back, while the Crew Cab also adds a multi-positional bulkhead, so you can fold the seats away to create more load space when you need it.

Performance and charge:- ZE’s battery has also been upgraded from  22 kWh to 33 kWh, is the most important feature of the van, its 59 bhp electric motor is a significant step forward too. Like the Zoe, Renault has constantly developed the Kangoo's battery tech and electric motor. A 59 bhp electric motor gives a range of 170 miles. That's under the older NEDC test: Renault also provides expected range mileages that vary between 125 miles in the summer to as little as 75 miles in the winter. The entire electrical system has been upgraded to support fast-charging from a single phase 7 kW charger.

The bigger battery has a  better range, the Kangoo ZE also has a better charging time than before, and now supports single phase 7 kW (32 A) chargers. A full charge takes six hours, but a quick charge top-up is also possible, with an hour-long recharge good for around 22 additional miles. As always, topping up over a regular three-pin power supply will take a long time  — around 18-20 hours for a full charge.

The ride quality in the Kangoo ZE is particularly good, with the added weight of the batteries helping the van to feel even more settled on the road. Potholes and challenges on the road are avoided comfortably.  The ‘Eco’ button, situated where you’d expect a gear stick to be, also proves remarkably efficient at increasing range by dulling the urgency of any aggressive attempts at acceleration — thus helping you to stretch out every bit of range from the battery.

Interior:- The interior of the Kangoo ZE is similar to that of a regular Kangoo. Several face-lifts have been done over time and the storage now is all you'd expect from a small van. There’s a central storage compartment between the driver and passenger seat, and an A4 sized storage space in the dashboard. Hard plastics are widespread, and while they’re not offensive to touch as such, they are considerably rougher than other offerings in the van world.

There's also a  new heat pump which has improved efficiency in this latest generation electric Kangoo. The heat pump stops the air conditioning from draining the battery and allows the van to be pre-conditioned while plugged into a charging point. Heating or cooling the van can therefore be done without losing range before you start driving  and especially during winter.

Cargo space and size:- The Kangoo ZE is available as a standard-length van, a Kangoo ZE Maxi long-wheelbase version or a Kangoo ZE crew van variant with room for up to five people. The length of the loads is  of up to 1476 mm for the regular Kangoo and 1862 mm for the Maxi van are possible, but it’s the payload that changes in the battery electric vehicle. The 800 kg maximum of the standard van drops to 640 kg  which is below  the 650 kg maximum of the heaviest diesel van. The load space has a width of 1460 mm and internal height of 1129 mm. Just like the standard van, the Kangoo ZE has 180-degree-opening asymmetric doors at the rear as well as six floor-mounted load lashing points.