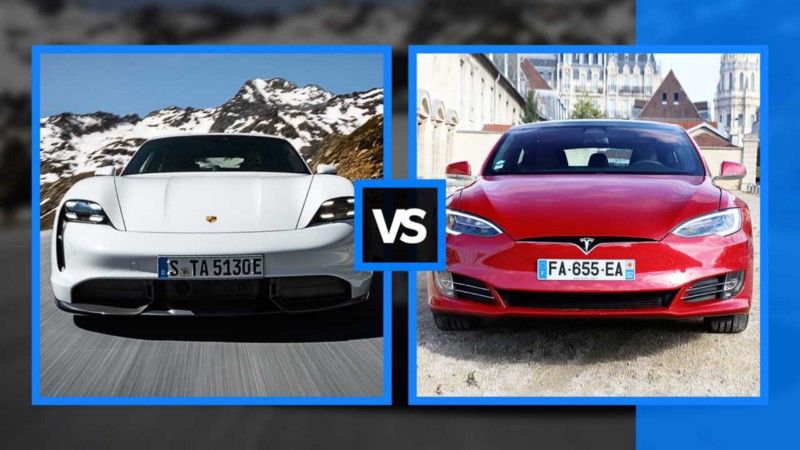 The Porsche Taycan is a missile aimed straight at Tesla. The German electric sedan packs everything needed to give the Model S its first real fight. The Porsche is just as fast, is sleeker thanks to a lower drag coefficient, and packs several technical goodies missing from Tesla’s sedan. However, the Tesla Model S has a longer range and is much less expensive.

Specs alone cannot properly illustrate a vehicle’s worth, but they’re a good starting point. What follows are several key areas comparing the two trim levels of the Porsche Taycan against the two versions of the Model S currently available.

Since the Taycan Turbo S and Model S Performance sort of compete against each other, it’s not a surprise that they’re similarly sized. In terms of overall length, the Model S is just 0.3 inches longer, and its width trails both Taycan variants by just 0.1 inches (although it grows to be 1.8 inches wider when including mirrors). The cars may have similar lengths, but Tesla’s wheelbase is 2.3 inches longer. The Tesla has the widest rear track of the three, but what’s most interesting here is that the Taycan’s front track (the distance between the center of the front wheels) is wider than the rear track in both variants. Interesting.

Teslas have always touted their range, and the Model S Performance is no exception, despite lagging behind its Long Range variant sibling. Since the EPA has yet to rate the Taycan, we’ll be going off Porsche’s own WLTP estimates for its range, which are currently 256 miles for the Turbo S, 253 miles for the base 4S and 288 miles for the 4S with the Performance Battery Pack option. It’s interesting that Tesla can pull the range it can from its 100-kWh battery, considering the Taycan Turbo S and 4S with PBP aren’t too far behind at 93.4 kWh. The 4S has the smallest battery of the bunch at 79 kWh.

The Taycan Turbo S is capable of over-boosting for short periods of time to produce about 750 horsepower and 774 pound-feet of torque, enough to shove the car to 60 mph in 2.6 seconds, continuing on to a top speed of about 162 mph. Without the over-boost function, the motors produce 616 horsepower. The 4S’ base variant over-boosts from 429 to 522 hp and 472 lb-ft of torque, while the 4S with the Performance Battery Pack raises output to 482 hp (563 hp with over-boost) and 479 lb-ft of torque. Both 4S variants will reach 60 mph in 3.8 seconds, and both have a top speed of 155 mph.

The Model S Performance, on the other hand, produces approximately 762 horsepower and 723 lb-ft of torque from its motors. Sixty mph arrives in a slightly quicker 2.4 seconds, and the top speed is a smidge higher at 163.

The Taycan 4S is the slipperiest of the three cars, with a drag coefficient of 0.22 versus the Taycan Turbo S’ 0.25 and the Model S Performance’s 0.23. The Taycan Turbo shares the same figure as the 4S, as well.

Tesla is a master of the big-screen game, being the first to debut a positively monstrous 17-inch portrait-style infotainment touchscreen in its vehicles, in addition to a 12-ish-inch screen replacing the gauge cluster. Tesla’s own infotainment system lacks Apple CarPlay and Android Auto, but it does allow for Bluetooth music streaming, in addition to built-in Slacker Radio capability and over-the-air updates.

The Taycan, on the other hand, splits its screens up a bit more. The gauge cluster is a 16.8-inch screen capable of displaying multiple features at once. There’s a centrally located 10.9-inch infotainment screen, with a second 8.4-inches for climate controls and handwriting recognition. Apple CarPlay is standard, as is a new digital assistant that answers to “Hey, Porsche.” If that’s not enough, there’s also an optionally available infotainment screen just for the front passenger.

And then there’s Autopilot. Tesla’s lane-holding highway assist has been kicking around in various iterations for years, with more features being tacked on along the way.

The current Model S Long Range starts at $79,990 before factoring in local incentives and climbs to $99,990 for the Performance. With added extras like premium paint colors, 21-inch wheels, the black-and-white interior and the not-yet-released “full self-driving” feature, a fully loaded Model S Performance comes in at $114,900.