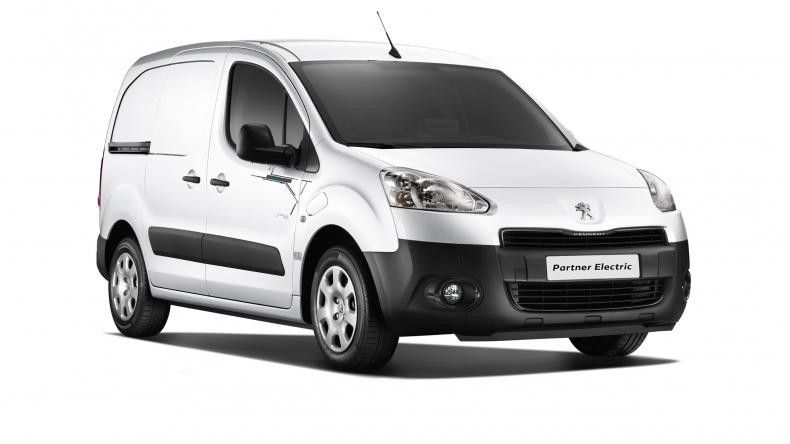 The Peugeot Partner Electric is a sister model to the Citroen Berlingo Electric. And as it was Citroen that led the development of this generation of va. It uses the same technology and running gear as its sister model, and like the Citroen, can count the Renault Kangoo Z.E. and Nissan e-NV200 as its main rivals.

Like the Berlingo, the Peugeot Partner Electric was introduced in 2015, some five years into the Partner’s model life. It’s based on an old platform that also underpinned the Peugeot 307, 3008 and 5008 MPVs and even the Peugeot RCZ coupe. Here, the platform is extended to create more load space in the back, and the Partner Electric is offered in two body lengths — L1 and L2, with the latter gaining its length behind the rear wheels. Both get asymmetric opening rear doors and the Partner Electric is based on mid-range SE trim, so there’s a modest amount of kit, but you don’t get any useful items, such as cabin pre-conditioning or sat nav to help find charging locations.

There are two charging options, with a standard socket under a flap on the offside front wing and a high-power connection on the nearside rear wing. There’s a standard three-pin charging lead that you can plug into the mains, while Peugeot also offers a high-voltage CHAdeMO plug. Thanks to the Partner Electric’s modest 22.5 kWh battery, it’s possible to charge the battery from flat in eight hours from the mains if you have a dedicated wallbox installed (it’s 12 hours from a three-pin plug), meaning it can easily be done overnight, while the CHAdeMO socket can take advantage of 400V charging, which will give an 80% charge in 35 minutes.

Power comes from a 49 kW electric motor rated at 66 bhp, which is less powerful than any of the diesel Partner vans, but it makes up for this with healthy instant torque. This power goes to the front wheels through a single-speed gearbox, and the Partner Electric has a top speed of 68 mph plus a 0–62 mph time of 18.7 seconds. The electric motor is linked to a pair of battery packs that are mounted in a subframe at the rear axle, which have a combined capacity of 22.5 kWh. This gives the Partner Electric a claimed range of 106 miles, although real-world driving is likely to see you achieve only around 70 miles, which is the same as the newer, larger and more spacious Renault Master Z.E. can manage.

As mentioned, SE isn’t the best-equipped model in the Partner range, although you can get an optional Look Pack that adds body-coloured bumpers, door handles and door trim. Air-conditioning is included (it’s optional on the Partner diesel), while three-abreast seating helps the Partner stand out from the Kangoo and e-NV200.

On the road, the electric drive system’s instant torque gives the Peugeot Partner Electric a decent turn of speed away from the lights, but it soon runs out of puff the faster you go. Unless you add the optional steel bulkhead behind the driving position, the Partner is surprisingly noisy for an electric vehicle. It’s near-silent at low speeds, but anything past 30 mph sees road and wind noise enter the load area and echo back into the cab.

In corners, the low-set batteries don’t harm the van’s centre of gravity, but their sheer weight means the Partner Electric lumbers around. The standard Partner diesel isn’t much fun in bends and the electric version is no better. And while the extra weight of the batteries should dampen the ride somewhat, this is offset by the stiffer suspension needed to take their weight, so the Partner Electric is still pretty bouncy.

The quoted range for the Peugeot Partner Electric is 106 miles, which is around 70 miles less than Renault claims for the Kangoo Z.E.. This is based on an older efficiency test, which has now been superseded. Either way, the real-world driving range of the Peugeot is likely to be around 70 miles in ideal conditions, which isn’t that great when you consider the Kangoo can easily cover over 110 miles in the same situation.

As it has the same running gear as the Berlingo Electric, the Partner Electric is charged in the same ways. The fastest option is the 400V CHAdeMO socket located on the nearside rear wheel-arch. This can charge the battery from flat to 80% capacity in 30 minutes. The remaining 20% gets topped up more slowly because of the way the cells are charged, but it should take roughly 20 minutes to complete.

The second mode is via the mains, which uses a second socket on the offside front wing. This can be plugged into a three-pin plug socket or a dedicated home-charging box (there are two different types of charging cable for this) and it has a 12-hour charge time via a domestic plug, or eight hours from a wallbox. Either way, if you put the Partner Electric on charge overnight, the battery should be full by the morning.

There’s an eight-year warranty for the Partner Electric’s battery, which guarantees the cells against a loss of capacity during that time or within 60,000 miles . This might sound impressive, but it’s the industry standard for EV battery warranty cover. In addition, Peugeot offers a second EV warranty that lasts five years/40,000 miles and covers the electric motor and drivetrain. The rest of the van is covered by the same three-year/100,000-mile warranty as the diesel Partner, and there’s 12 months’ breakdown cover from date of purchase.

The front-mounted 49 kW electric motor has a quoted power output of 66 bhp, which is 6 bhp more than the Renault Kangoo ZE. That gives the Partner a 0–62 mph time of 18.7 seconds, which is pretty lethargic, and a top speed of only 68 mph.

With more weight to carry around than a standard Peugeot Partner — the Electric is nearly 300kg heavier than the lightest diesel version — it’s no surprise that the Partner Electric isn’t much fun to drive. It’s based on an older platform that’s been used on cars as varied as the 5008 MPV and RCZ coupe, but here it’s been set up with load-carrying as the top priority.

The weight of the batteries keeps the ride in check, although it does contribute to plenty of body lean in corners, even at low speeds. The suspension is on the firm side, but there’s still a fair amount of bounce, even though there’s more weight on board from the batteries.

If you’re looking for style from an electric van, then you’ve come to the wrong place — the Peugeot Partner Electric is pure commercial vehicle in its aesthetic, with hard-wearing plastics, easy-clean cloth seat trim and plenty of painted metal surfaces on show. While it’s definitely functional, it’s no more utilitarian than rivals the Renault Kangoo ZE and Nissan e-NV200.

The one advantage the Partner Electric has over these two models is its standard three-abreast Multi-Flex seating arrangement. This creates a 1+2 seat layout up front, with the driver getting their own chair and a double seat next to it for two passengers. Due to the Partner’s narrow width, the two passenger seats will be cozy with a couple of builders sat side-by-side, but at least it gives you the option of driving three-up if you need it. If you don’t need the middle chair, you can fold down the seat back to create a desk space.

The instrument cluster in the Partner Electric is largely identical to that of the diesel van. The main difference is that the rev counter has been replaced by a power indicator, while the two smaller gauges between it and the speedometer show battery capacity and how much power the electric motor is supplying when you use the accelerator.

There’s a solitary trim level on offer (SE), but it’s better equipped in Electric guise than if you bought a Partner diesel SE. Air-conditioning is standard, while a plastic floor lining is also included and you can have white or red paint as standard, too.

Options are limited, but there’s silver or dark metallic grey paint, and you can add power-folding mirrors, rear parking sensors, glazed rear doors, two types of bulkhead to divide the cabin from the cargo area, a Bluetooth connection, front passenger and side airbags, body-colored exterior trim and a full-size spare wheel

And of course there’s the option of L1 or L2 body styles, with the latter getting an extended rear end to create an extra 400 cubic centimeters of load space.

The Peugeot Partner Electric gets a pretty basic stereo. There’s an orange dot-matrix display for the radio, which receives FM and AM stations only, while a CD player is also included. If you want to upgrade the infotainment, Peugeot offers a colour touchscreen with DAB radio, Bluetooth and a USB socket for just under £500, but it doesn’t feature sat nav and doesn’t support app-based charging assistance.

With a bodyshell, suspension and interior kit that have been in production since 2008, the Peugeot Partner Electric should be well put together and up to the rigors of urban driving. It’s pretty rugged under the skin, while the eight-year battery warranty and five-year electric drivetrain cover should provide added peace of mind about the reliability of the electrical running gear.A passenger airbag is an option, as are side airbags.

Electronic stability control with hill-start assistance is included, while cruise control with a speed limiter is also thrown in. There are deadlocks and separate locking for the cab, and you can boost security further by adding an optional bulkhead between the cab and load area.