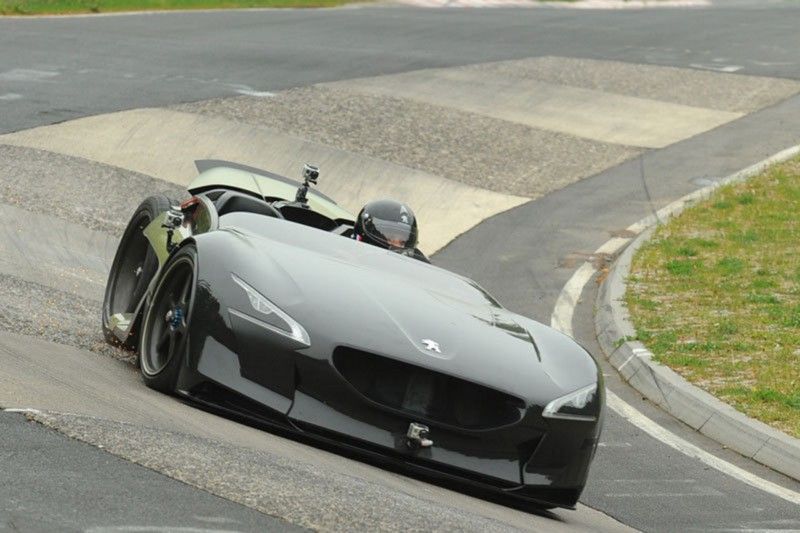 The EX1 is and equipped with two electric motors with a peak output of 125 kW (250 kW/340 bhp in total), and an immediately available constant maximum torque of 240 Nm at the front and rear. Aside from optimizing weight distribution, this setup also allows for four-wheel drive. The front suspension consists of a dropped link double wishbone arrangement, while the rear suspension comprises of a single swinging arm linked to a centrally mounted shock absorber which is connected via a rocker arm to provide a variable damping rate.

The car’s lightness, weight distribution and aerodynamics, torque and power of its two electric motors and its high-output lithium-ion battery all combine to give the EX1 lightning acceleration which the company says can exceed 1G of gravitational force.

Its lightness, weight distribution and aerodynamics, the torque and power of its two electric motors and its high-output lithium-ion battery make capable of very rapid acceleration. Peugeot says that the EX1 concept car has already broken international acceleration records for an electric-powered terrestrial vehicle.

The EX1 concept car is based on an architecture shaped like a water droplet, with a rear section built around two closely set rear wheels. The driver and passenger climb into the passenger compartment through a reverse-opening door, giving access to the two sports bucket seats.

The driver, seated at floor level in a driving position that helps enhances the sense of excitement (legs outstretched), drives the vehicle with two control handles, providing an experience similar to that of an aircraft pilot or video game, Peugeot says.

As well as the presence of harnesses inside the car, the occupants are also protected by the height of the carbon passenger cell, which has sufficient overhead clearance to include a roll-over protection bar. Similarly, the wind deflector, perfectly integrated in terms of style, allows the car to be driven on a daily basis without a helmet.