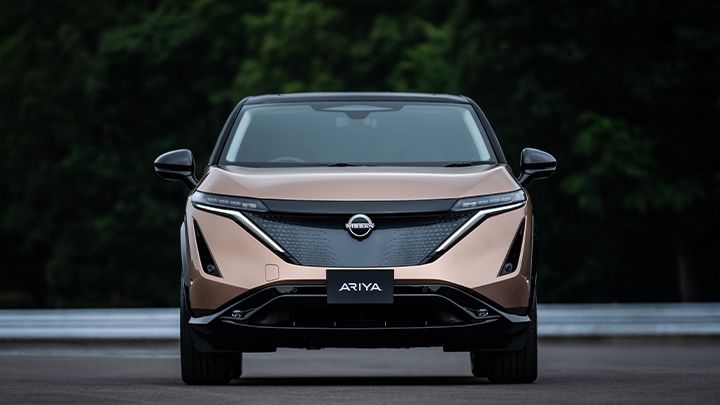 Nissan is one of the first car companies to offer all electric car, the first car to be introduced to the market was Leaf in 2010.At the time, Nissan had big plans to make a whole lineup of electric vehicles, which then-CEO Carlos Ghosn predicted would make up 10% of the global car market by 2020.The Nissan Ariya is the first all electric SUV from the Nissan company.The car will drive up to 300 miles on a single charge and features a high-tech interior, with almost no buttons or knobs.

Ariya is the second car after Leaf.  It's bigger and roomier than the Leaf, a compact car, and has a design somewhat like Nissan's Murano SUV. The major difference between the Ariya and the Leaf  is the grille design that is found on Ariya. Electric cars don't require nearly as much incoming air as gasoline-powered car, so the front grille is purely a design feature. The Ariya's grille has a large sunken area with a subtle pattern that's supposed to resemble a traditional Japanese kumiko design. It also has a slightly redesigned Nissan logo that lights up.

The electric SUV will be all-wheel-drive and with a choice of two battery pack sizes. The base model will have a 63 kilowatt-hour battery pack.With the larger 87 kilowatt-hour pack, the Ariya will be able to go about 300 miles on a charge based on US EPA tests, according to Nissan. The estimate range of the smaller battery pack has not been released yet.  The Ariya will be available with Nissan's ProPilot Assist driver assistance technology that allows some hands-free driving on highways in some countries.

In the interior of the Ariya  it is roomy because their is no engine compaired to the ICE cars.The Ariya's large flat battery pack is mounted under the SUV's floor, which allows the vehicle to have a completely flat floor, an arrangement also found in a number of other electric models including the Tesla Model Y.

The Ariya will be able to go from a stop to 60 miles an hour in about 5 seconds, this performance is similar to Nissan's 370Z sports car.