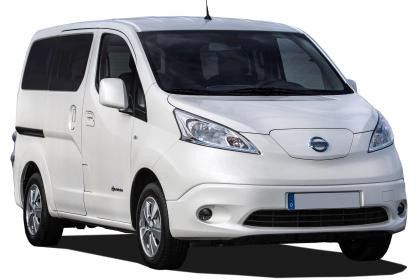 The Nissan e-NV200 is the world’s first all-electric seven-seat MPV. The e-NV200 uses the same basic electric powertrain as the Nissan Leaf. Despite the NV200’s much greater frontal area it has the same 24 kWh battery as of that of Nissan Leaf. However at the start of 2018, the e-NV200 received a big upgrade in the form of the latest 40 kWh battery pack. This replaces the 24kWh battery and boosts driving range by a significant 60%, making buying an electric MPV interesting for customers. The battery pack can be able to be charged to 80% in just 40 minutes using a public rapid charger, while a dedicated home wall box will fully charge the e-NV200 in 7.5 hours. Recharging from a standard three-pin plug takes considerably longer around 21.5 hours.

The third-row seats can be tricky to access for adults, but in general there’s plenty of room for you and your passengers to stretch out in the Nissan e-NV200 Combi’s comfortable seats. However, the quality of materials and finishes used betray the fact that this model is based on a van. The dashboard controls are logically laid-out and easy to get used to, plus the Combi has some clever features, allowing you to do things like track past journeys, check the battery status and even set the climate control remotely using the Nissan Connect EV smartphone app.The e-NV200 isn’t too heavy it weighs between 1517 and 1564 kg , the official range is just 106 miles.To increase cargo room, the two seats in the third row can be folded up against the insides of the car. The middle-row three-person bench seat can also be folded and tumbled out of the way, further increasing load capacity.

The e-NV200 Combi comes with a choice of one trim level (Tekna) and two charging options (Rapid and Rapid Plus) in both five and seven-seat forms.The Rapid versions take four hours to top up via a 50kW DC charging point, while the Plus versions include high-speed 6.6kW AC on-board charging capability.

As for the standard equipment, the Tekna trim includes 15 inch alloy wheels, twin sliding doors, automatic lights and wipers, a reversing camera and cruise control on the outside, while inside there is climate control, heated seats and steering wheel, Bluetooth, keyless entry and go, and Nissan’s Carwings infotainment system complete with DAB radio and sat nav. The good thing about this car is that its so quiet, smooth and effortless in traffic.

Driving a van that is so quiet, smooth and effortless in traffic is an exiting feeling. With no roaring diesel engine and no manual gearbox requiring endless shifts to stay on the torque curve, the e-NV200 makes light work of heavy traffic. However everything that is good has its own limitations , for the e-NV200 has problem particularly during the hot weather high temperatures and the vehicle’s huge windscreen demand use of the air conditioning. This is a large cabin, so the climate control will be putting a strain on the battery in much of the summer and winter. The vehicle’s big frontal area and capacity for people and luggage will also put the battery under strain on faster runs.The top speed of 76 mph is not a huge problem . A decent slug of torque and single-speed transmission means that the van is able to keep up with other traffic and change lanes in safety.

The price range for the e-NV200 spans from £27,216 for the entry-level Tekna Rapid five-seater to £27,882 for the plush and quick-charging Tekna Rapid Plus seven-seater.