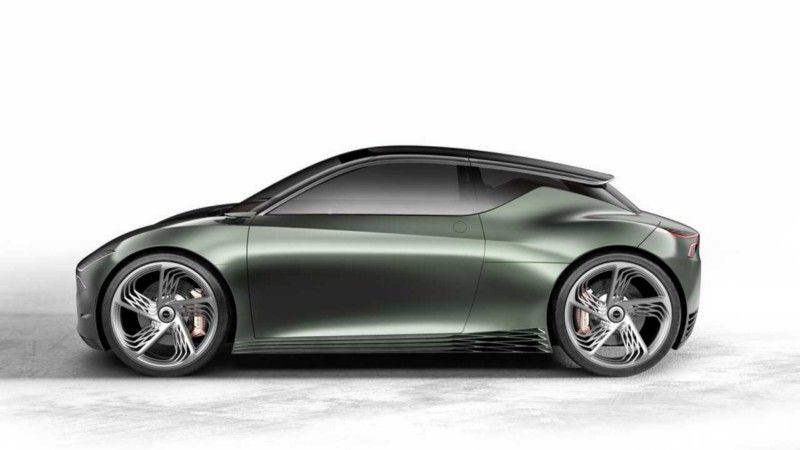 Hyundai-owned luxury auto brand Genesis has shown off a new electric concept car called the Mint, which it hopes will signpost the future of city-center personal transport. Genesis calls the Mint a new vehicle typology and says that it offers an innovative user experience.

It’s a small car with only two seats and two doors, but the butterfly-wing doors are a showstopper despite the mini size. There’s no trunk, but there is a shelf behind the seats to stash some items for your jaunt around town.

The all-electric vehicle would go 200 miles on a single charge and capable of fast charging.

Inside the car, the steering wheel has a center screen surrounded by six other copper-lined screens displaying car info. The center screen displays all the necessary driving information like speed and vehicle information.

But, since Genesis has no plans to bring the car to production, maybe specs don’t really matter too much right now. Let’s have a look at the design:

The car has a small footprint, similar to a compact hatchback rather than Genesis’ other sedans. But with a low-slung roof and wide stance with large rims and tires, it looks quite sporty. It also has no visible grille, revealing its electric nature (and, of course, no tailpipe).

It’s a two-seater, small enough that Genesis has forgone even the illusion of a vestigial rear seat, instead opting for a large parcel shelf on which to put a very small amount of cargo. This cargo area, such as it is, is accessed through scissor-style doors, rather than a conventional hatch.

The interior is almost entirely covered with leather, and the windows are large all around and above, probably making the interior seem much more spacious than it is.

Genesis calls this a new vehicle typology, and beyond the strange hatch doors, they’re right. There aren’t a lot of luxury two-seater sporty compact cars out there.

Genesis is the luxury vehicle arm of Hyundai, which so far produces no electric vehicles. Genesis has plans to bring electric car in 2021 with a range of 500 km (310 miles) per charge. This new Mint concept doesn’t seem to fit that bill, with a planned 200-mile range, and perhaps too small of a size to be considered a standard sedan.

Lets wait for confirmation of a real, production-ready Genesis EV which could be built in reasonable volumes in 2021. It’s nice to see concepts, but what matters is getting rubber on the road.

Beyond Genesis, Hyundai already has a few electric cars in its stable, with the Hyundai Ioniq Electric and the newly-released Kona EV. Hyundai also shares technology with Kia, and both companies are partial owners of each other. Through this partnership, they also produce the Kia Niro EV and Kia Soul EV.