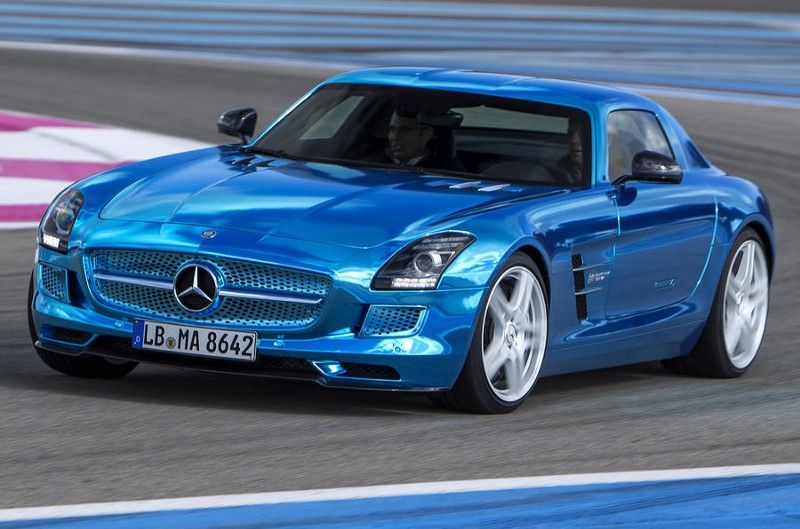 The Mercedes-Benz SLS electric drive boasts a 155 miles range and 185 horsepower. The 60-kWh lithium-ion battery pack and the software that manages it were developed by the Formula 1 experts at Mercedes AMG High Performance Power trains.

The SLS comes with four electric motors making 185 horsepower and 184 lb-ft of torque each, the total output of the electrified gull wing tops even that of the SLS AMG Black Series. The acceleration is estimated to be 62 mph in 3.7 seconds. SLS has 11 stereo speakers , acceleration, cruising and braking.The Electric Drive has 740 bhp and 737 lb ft, but it also weighs 2110 kg, which is 560kg more than the 622bhp SLS AMG Black Series .

Electric Drive can cover 155 miles between charges. It takes three hours to replenish the batteries if charged through a special (optional) 22 kW wall box, or 20 hours through a normal three-pin plug. The chassis has a new carbon fibre incorporated into the existing structure. It runs centrally from front to rear and houses and protects the battery pack, which consists of 12 modules, each containing 72 lithium-ion cells.

The electric SLS’s is powered by the four electric motor each driving a single wheel making the car a 4WD, each wheel can be accelerated or electrically braked to constantly make the most of the tyres’ grip and manipulate the handling balance, a system called AMG Torque Dynamics. The ED’s computers have precise control over the forces that make a car change direction. Accelerating and braking each motor independently of the others turns this 4700 pound. The electric car is reluctant to change direction, and the steering is sluggish. With the body always a step behind the wheels, the SLS feels more like an S-class than a half-million-dollar sports car.

With a range limited to 155 miles in its most efficient setting, and a three-hour recharge time on a 400 volt wall box, it’s a car to be enjoyed in short but very satisfying bursts of driving fun.