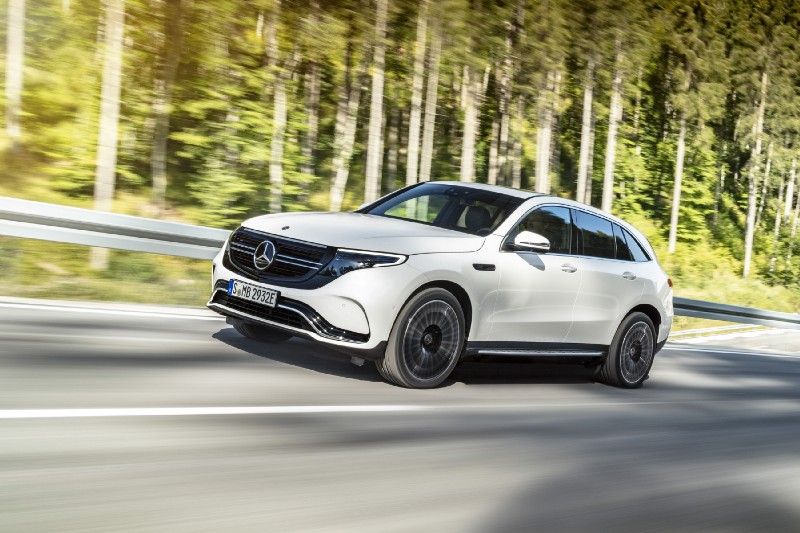 The Mercedes EQC is expected to have a price of around £55,000 , making it cheaper than direct competitors such as the Jaguar I-Pace and Tesla Model X. The car was unveiled on October 2018 and its expected to go on sale soon.

The Mercedes EQC has an EV twist on the styling you’ll find on a conventional (petrol or diesel) Mercedes SUV. The clearest distinguishing feature is the front end’s black panel. It’s framed by fibre-optic lighting and surrounds the grille, connecting the left and right headlights and flowing into the deep front bumper. The headlights themselves look pretty special, too, their blue LEDs, black background and blue ‘Multibeam’ lettering make this instantly recognizable as an EQ model even at night.

At the sides of EQC there are classic crossover looks with an SUV roof line and glass area that slopes down towards the small rear windows. The charging flap is found above the rear wheel at the right-hand side of the car and the large alloy wheels (you can choose from 19, 20 and 21-inch versions) are also available with blue highlights on two of the sizes. Unlike its other SUVs, Mercedes hasn’t fitted the EQC with roof rails instead you get attachment points integrated into the roof to improve aerodynamics.

The rear spoiler does the same, it has buttresses that run down the sides of the rear windscreen. The rear end’s most prominent feature, however, is the full-length light bar that wraps around the back of the car — much like you’ll have seen in the new Audi Q8 , which helps the car appear broader. The last thing you’ll notice is the chrome strip that runs the length of the rear bumper and frames a pair of fake exhaust pipes.

EQC’s interior has features you’ll spot from other Mercedes models , such as the shiny black plastics and infotainment screen that sprouts from the top of the dash.

But there are also plenty of styling cues that are unique to the EQC. For example, Mercedes’ turbine-style air vents have been swapped for rectangular versions with key-shaped, rose-gold louvers and you get EQC unique trim pieces that look like the cooling fins on a stereo amplifier. The EQC gets the same LED colour-selectable ambient lighting you’d expect on other Mercedes model, but in the EQC you also get interior fibre optics.

In a similar way, the leather, metals and open-pore woods you’d expect to find in other Mercedes cars are added to with EQC’s unique finely woven ‘Sunnyvale’ upholstery and metallic-look textiles.

Aside from just looking nice, the interior should have plenty of space for a family of four, with the flat rear floor giving plenty of foot room for passengers in the back. The 500-litre boot isn’t huge for a car like this but will be easily capable of swallowing a couple of large suitcases.

Two huge high-definition 10.25-inch screens deal with the car’s infotainment and come fitted as standard to all EQC models. They can be set in three themes that is Modern Classic with regular dials and light colors, Sport which has a turbine-style display and Electric Art which has a digital look with a multi-colour display that emotively tells you exactly what the electric powertrain is getting up to.

The infotainment screens are controlled via a touch-sensitive pad that’s located between the two front seats, by Mercedes Linguatronic voice activation system or directly through the touchscreen.

The infotainment system has various functions that are unique to the EQC, for example, it can tell you how power is being distributed around the car’s four-wheel-drive system. The sat-nav, meanwhile, lists charging places and (when you have an internet connection) their opening times.

The MBUX operating system’s Linguatronic voice activation system understands regular speech all you have to do is start your commands with the phrase ‘hey Mercedes’, although, it can be a little temperamental. The system can be used to control much of the car’s systems so, for example, you can turn up the heater without having to take your eyes off the road.

What the MBUX system also brings is artificial intelligence so it can learn your movements throughout the week and preset the sat-nav accordingly before every trip. If you usually call home on the drive back from work, the system will automatically offer to make the call and it can also switch radio stations, say if you often tune to the evening news.

A benefit of the EQC’s electric powertrain is that it allows for pre-entry climate control, so you can heat the interior remotely or on a timer, meaning on cold days there’s no need to have to worry about deicing the car. Equally, in sweltering summers, you can cool the cabin before you get into it.

The Mercedes EQC is an all-electric car, but that doesn’t mean you need to worry about performance. With two electric motors — one for the front wheels and one for the back — the EQC boasts the equivalent of 408 hp enough to fire it silently from 0–62 mph in just 5.2 seconds. That’s enough to worry plenty of sports cars but still quite away of the Tesla Model XP100d’s 3.1-second time.

More importantly — if you considering using the EQC as your only car — Mercedes reckons you should be able to get up to 280 miles from a charge. And while we’re on the subject of charging, you’ll be able to plug your EQC into a standard three-prong plug and you’ll be able to return a battery with 10 percent charge to 80 percent in 40 minutes.

Having a motor for both the front and rear axle mean the EQC is four-wheel drive, so it’ll have lots of grip on slippery roads and should also be pretty handy off-road. You can even use it to tow trailers of up to 1,800 Kgs in weight, a task that the EQC should manage easily thanks to its sizable 765 nm of pulling power (torque).

The EQC offers five driving modes including Max Range, which can coach you to drive the car as economically as possible. Set in Max Range, the EQC’s accelerator pedal vibrates to tell you when to take your foot off the ‘gas’, for example, if you’re coasting downhill or approaching a roundabout.

You also get five levels of brake recuperation — in its most severe setting you should be able to drive the Mercedes without ever touching the brake. Simply lifting your foot off the accelerator will provide all the stopping power you need in normal driving, while also topping up the battery.

If you’d rather not drive at all, then you’ll also be able to leave the EQC to get on with the job for you. Active Distance Assist Distronic allows the EQC to steer in lane and detect tailbacks of traffic up ahead, slowing the car accordingly. It can even bring the car to a halt if needs be, before setting off again automatically when traffic starts moving. Automatic emergency braking comes as standard, but pay extra for the Driver Assistance Package and you’ll also get Evasive Steering Assist, which can automatically steer the car around an imminent accident, and Blind Spot Assist, which will apply the brakes if you try to pull out in front of a car that’s hidden in your blind spot.