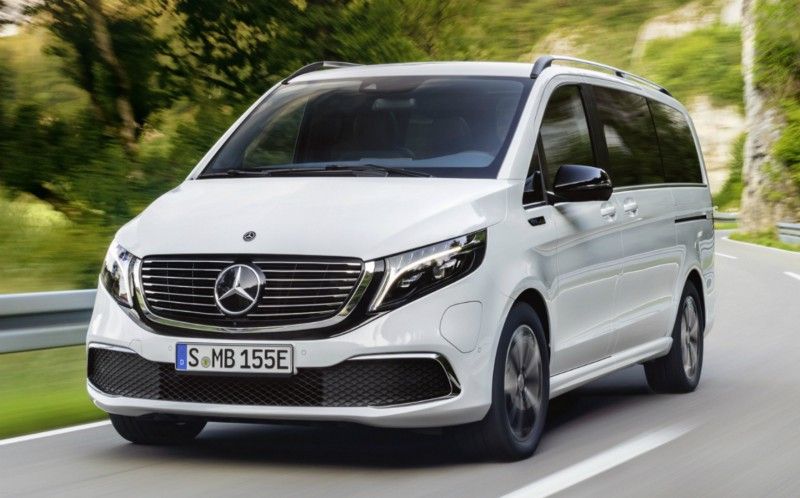 Mercedes Benz and Volkswagen are among the largest Auto companies and they are making efforts to bring electric people carriers in the market. Big families who don’t fancy an SUV, this car will make sense to them. While Volkswagen’s ID Buzz harks back to its past and the iconic split-screen T1, though, the Mercedes EQV is all about the future.

Like the EQC crossover SUV and the EQA concept, the EQV features a black radiator grille with a chrome strip that sweeps in front of the headlights. The EQ brand face looks at home on the van, but at the rear, it’s very much a V-Class. The five-spoke wheels also recall other EQ electric vehicles and are nearly identical to the EQV concepts save for the bright aqua accents. Overall, it’s about as attractive as a people-hauling van needs to look.

Under the metal is an electric powertrain situated at the front of the EQV made up of an electric motor, cooling systems, and a fixed-gear transmission. The lithium-ion battery that motivates the EQV is under the floor to save on cargo space. Total, drivers will have 201 horsepower at their disposal and the 90-kWh lithium-ion battery will provide an estimated range of 250 miles. The charge time has not been given out but DC fast charging will recharge the battery to 80% in less than 45 minutes.

Inside there is a driver-controlled regenerative braking system. One paddle on the left makes the regenerative system stronger, and a paddle on the right tones things down. As well as various driving modes to adjust how the car feels on the road, there’s also an E+ mode that maximizes the EQV’s range. Crank it all the way up and one-pedal driving is possible, per Mercedes-Benz. The brand’s “Eco Assistant” will also take navigation data into account and adjust recuperation levels as needed. The cabin has not been changed however, the leather is dyed blue and rose-gold accents sprinkle the dashboard and trim. A silver material surrounds the air vents and more rose gold finds its way to the seats as a contrast stitch. At the center of the dash is a 10-inch display with the latest MBUX infotainment system. “Hey Mercedes” awakens the smart assistant that understands more natural and conversational statements. Six seats are standard, but an individual or bench row can turn the EQV into a seven or eight-seat vehicle, too.