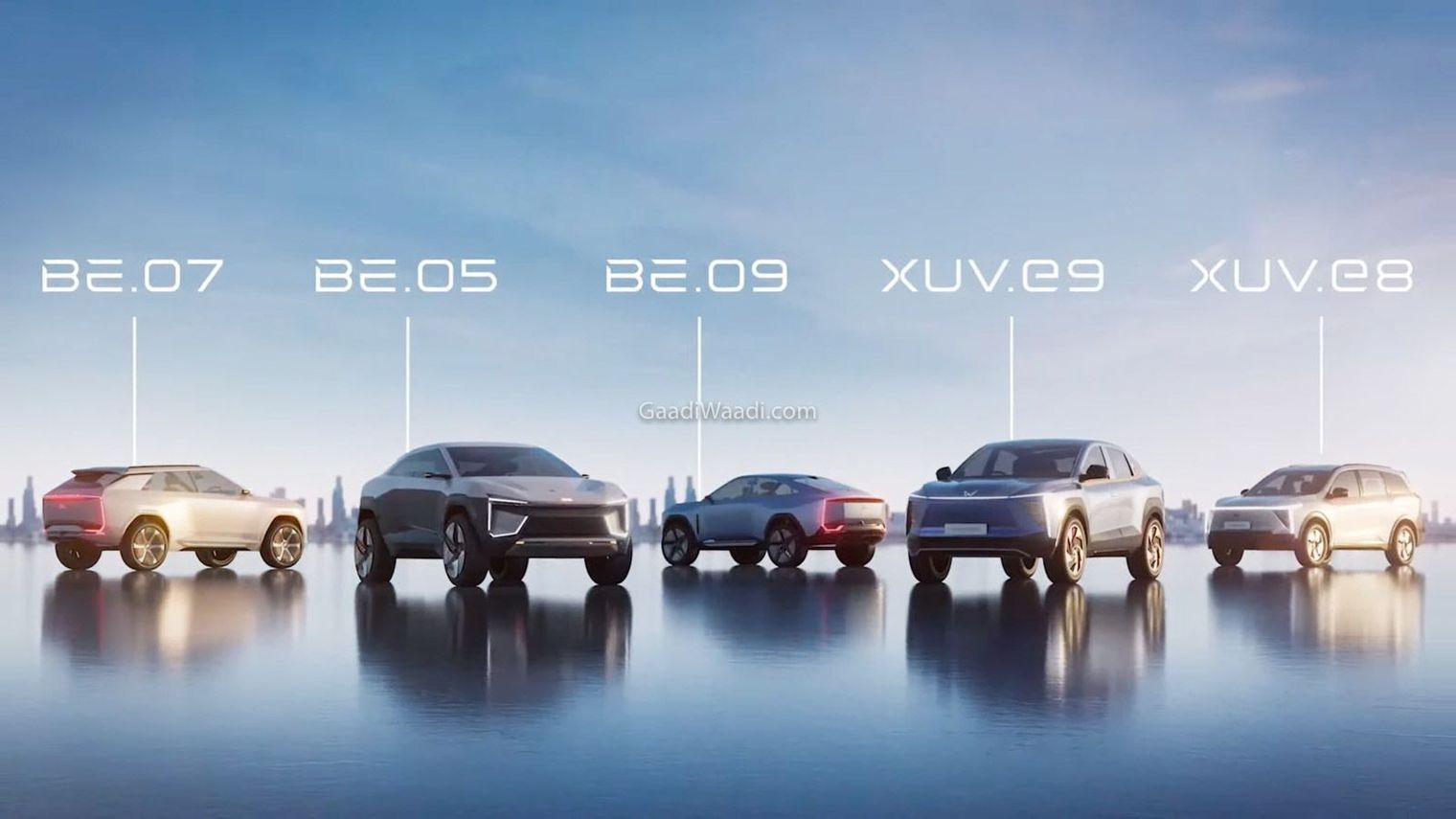 Mahindra has announced its new electric cars that will be sold under two brands the XUV and the BE. All five are designed in Mahindra’s design HQ in the UK and could be sold globally.

All five electric SUVs will be built on the just-revealed INGLO (Indian Global) platform, created in association with Volkswagen! The MEB (Modular Electric Drive Matrix Battery) platform of Volkswagen is the base from which the INGLO platform is created. This is a skateboard platform, as is common for electric cars built from the ground up. It was announced that the platform would use Blade and Prismatic electric batteries that will offer fast charging, 60-80 KWH battery capacities depending on the model, and sub-six-second acceleration times.

There will be both rear-wheel and all-wheel drive options, and power will range from 228 BHP to 282 BHP for the single motor variants and 335 BHP to 389 BHP for the all-wheel drive variants. As these are early days, these figures might be subject to change as vehicle development progresses, however.

Two electric vehicles to be built under the XUV sub-brand name will be called the XUV.e8 and XUV.e9. The all-new sub-brand, BE, will have three vehicles under it – the BE.05, BE.07, and the BE.09. BE here stands for Born Electric. Mahindra said that the BE.05 and the BE.09 will be SUVs. The third under the BE brand, the BE.07, will be a three-row vehicle with SUV design elements.

Which will be launched first?

The first out of the factory will be the XUV.e8 in December 2024. Now that might be disappointing news to most of us, but all-new electric car development can be a highly complex thing when done right. The second will be the XUV.e9 which will make its appearance only in April 2025.

The XUV.e8 though looks almost like the XUV700 itself but with electric car design elements. The BE electric cars will take even longer, so will see them only towards the fag-end of 2025 and early 2026.

The XUV.e8 will be inspired by the design of the super-popular Mahindra XUV700. Mahindra has said that the dimensions of the vehicle will be as follows: Length 4740mm, width 1900mm, height 2762 mm. The e8 will also get an all-wheel drive option.

The second vehicle, the XUV.e9 will have a coupe-like design and will be even longer with 4790mm length, 1905mm width, and 1690mm height.  The same AWD option would be available here too as with the e8.

The BE brand and its more dramatic designs

While the earlier two will have the familiar Mahindra and the XUV design language, here the company departs from that.  Looking at the photos, there is little that we can call signature Mahindra design elements.

The BE.05 has a dramatic and bold design, and Mahindra says it will be a sports electric vehicle. The dimensions are 4370mm in length, and 1900mm in width and it will be 1635mm tall. The wheelbase will be 2775mm. The BE.05 will come into the market only in 2025 though – and if we go by the history of car launches in India, dates announced so far in the future are not final, and there might even be further delays.

The BE.07 has dimensions as follows. Length 4565mm, width 1900, and height 1660 mm. The wheelbase will be 2775 mm. The marketing speaks along with the reveal said “Designed to offer a first-class experience, with versatility, configurable profiles, and curated multi-sensory experiences.” While that might sound confusing, this might mean an electric SUV with cutting-edge features of its time. So all current much-in-demand features plus a bunch of unknowns.

No information on the BE.09 is available at the moment. Mahindra leaves us hanging with this “A head-turning SUV grand tourer with a chiseled design, dynamic roof, and solid stance. Allowing four passengers a first-class experience.”