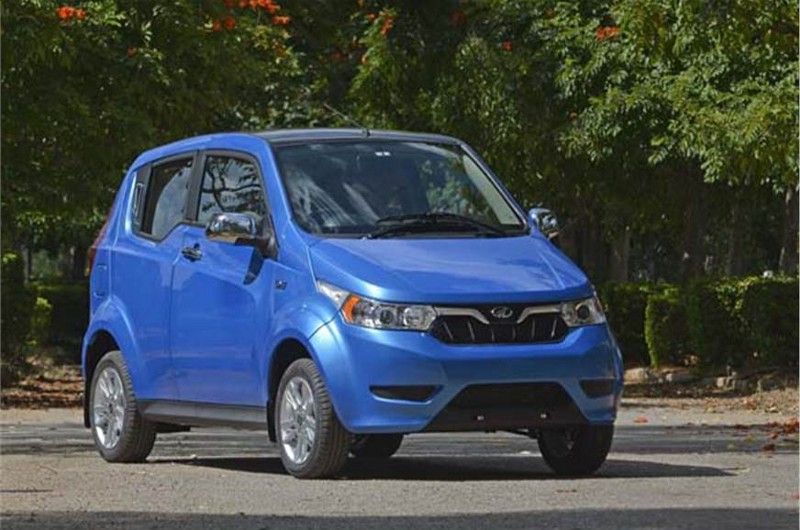 If you are looking for a zero emissions car the Mahindra e20 is there to quench your thirst for an EV. However its tiny size, three-door layout and sub-100-km range would put you off; you could look at the Mahindra e-Verito, but then you would hear about reports that car would just not achieve the claimed 110 km range, no matter how sedately you drove it. Mahindra has expanded your options by offering a four-door version of the e2o, christened, indicatively, the e2o Plus.The ‘Plus’ stands for everything the car offers over the standard e2o, such as two extra doors, more legroom in the rear, a longer claimed range and an upgrade in software and connectivity.

Mahindra Electric has opted for a slightly more conventional design for the e2o Plus, as compared to its quirkier small sibling, but its proportions are still off. The car measures 310 mm longer, 61 mm wider and 25 mm taller.More importantly, it gets a 300 mm longer wheelbase that translates to a surprising amount of room in the cabin. Up front, the e2o Plus sports an all-new grille — with vertical striae to bring it in line with other Mahindra cars ,flanked by the same projector headlights as the two-door e2o. The unique kink in the window line has been moved from after the C-pillar to before it. Moving to the back, you see a new roof-mounted spoiler and vertically stacked LED tail-lights, as opposed to the two-door e2o’s horizontal conventional units ones.

The biggest changes, however, are on the inside. The two-door e2o was surprisingly spacious in the back, but that was mainly because you expected it to be super-cramped. The e2o Plus, on the other hand, is properly spacious for its size. You have more than enough legroom in the front and back, and a good amount of headroom too. While three adults would find the rear a squeeze, two will find it adequately roomy. The seats too, are quite comfortable and offer good support. Boot space, at 135 litres, is not ample, but it is enough for two cabin-luggage-sized bags.

The dashboard is the same as that of the two-door e2o, featuring an Android-based touchscreen infotainment system manufactured by Blaupunkt in the centre console, rotary knobs for the air con and a digital instrument cluster that displays vehicle speed, shift status, driving efficiency, charge percentage and the distance to empty. The e2o Plus also gets all-round power windows, electronically adjustable exterior mirrors and key less go. Material quality, though, is a sore point. All materials in the cabin, ranging from the plastics and fabric to the switch gear feel a bit cheap.

The top-spec e2o Plus is powered by a 72 V battery back, which extends its claimed range to 140 km. The battery powers a motor with a peak output of 41 hp at 3,500 rpm and 91 Nm at 2,500 rpm. The lower spec variants however, come with a 48 V battery. These, being an electric motors, the car comes with a direct-drive transmission. Slot the gearstick into ‘F’ (Forward), step on the accelerator and the car. Since the peak torque of an electric vehicle is available from 0 rpm.There is a slight pause when you step on the accelerator, after which the car ambles forward sedately. Things are improved slightly in ‘B’ (Boost) mode, but don’t expect any excitement or gut-tickling acceleration.

The low speed ride is absorbent, with smaller bumps, lumps and crests are swallowed with apparent ease. Bigger obstacles, especially at higher speeds, cause the suspension to crash and thud. While most of the crashing and thudding is purely auditory ,it still does unnerve you slightly.

The e2o Plus’ handling is nothing to write home about. Its compact size and electric steering makes it easy to manoeuvre in tight spaces, but the steering lacks directness and offers little feedback. That it requires four turns from lock to lock makes for cumbersome driving, especially while parking.

Another problem with the e2o is cabin insulation. While motor whine has been reduced, a cacophony of other noises constantly crop up. The compressor switches on with a loud rumble at regular intervals, overshadowed only by the roar of the fans that cool the car’s batteries. The crashing of the suspension and the constant undercurrent of road noise only add to the din.

The claimed range of this car has been extended to 140 km (from 110 km) to dispel range anxiety. This, however, comes at a cost — the battery now takes a long nine hours to charge as opposed to the five hours for the two-door. A fast charger that can charge 90 percent of the battery in 90 minutes has been made available.