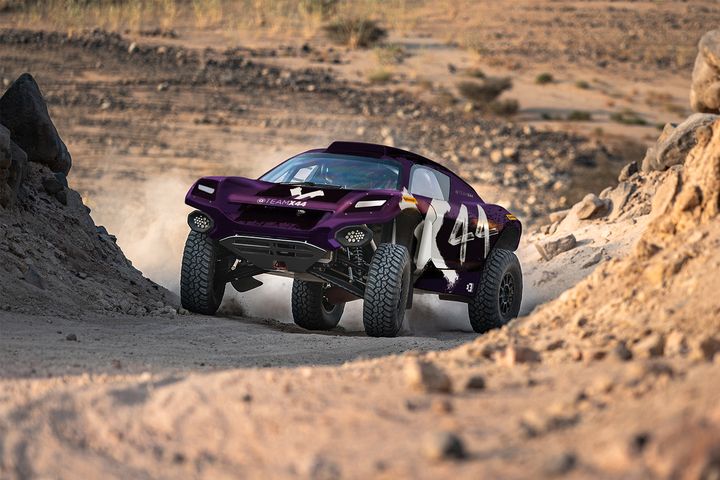 If you have ever watched car race you have probably seen or heard of Lewis Hamilton, but if you haven't we will tell you who he is and what his relationship with electric cars. Lewis Carl Hamilton is a British racing driver currently competing in Formula One for the Mercedes-AMG Petronas Formula one  team.

Hamilton may go down in history as the greatest racing of the time. He has eclipsed every other driver except Michael Schumacher in terms of the number of world driving championships won, races won, pole positions achieved, podium appearances, and (probably) the most money ever earned by a racing driver. By the time the current season is over in December, any records left for Hamilton to break will probably be in his rear view mirror.

A man with that much cash in the bank can afford to own any car in the world and Hamilton owns quite a few. According to Autoblog, his garages is stuffed full of exotic cars like a Ferrari LaFerrari, a Pagani Zonda, a McLaren P1, and an original Shelby Cobra from the 1960s. But he tells Autoblog, “I don’t drive any of the cars that I own anymore. I only drive my (electric Mercedes) EQC.”

Hamilton has made a big commitment to the EV revolution. He owns a team that will compete in the Extreme E off-road racing series for electric cars, which will hold its first events next year. He says he was impressed by Extreme E’s aims and goals, with include each team having at least one female driver. The races will be held in remote and often harsh environments including the Brazilian rain forest, Greenland, Saudi Arabian deserts and mountains of Nepal to highlight global warming. There will be no spectators allowed along the routes but the races will be broadcast on TV and social media. The cars with all their support staff will be transported around the world on a boat that doubles as a floating paddock.

According to the Extreme E website, the bespoke vehicle for its events will be the Odyssey 21, a battery electric vehicle boasting 400 kW (550 hp) of power and capable of sprinting to 100 km/h in 4.5 seconds and climbing 130% grades.

Hamilton says he is doing his best to lead an environmentally friendly lifestyle. He is s vegan who insists on being transported to and from airports in electric vehicles. He has also sold his private jet aircraft. “It’s difficult because there are people (who say) like ‘yeah, but you race a Formula One car around every weekend’.”  Formula One has made a valiant effort to wrap itself in a cloak of “green” intentions in recent years, with the powertrain for all its cars a form of hybrid that harvests electrical energy from braking and the heat of the engines and run on bio-fuel instead of gasoline.

Formula one series flies ten teams around the world and 20 times yearly , the events brings many machinery, parts and staff with it everywhere it goes.  That’s a lot of carbon dioxide being spewed in its wake from jet engines during each season. Nevertheless, it is doing something about its carbon footprint when many other racing series are doing nothing.

The once brash youngster who famously clashed with Fernando Alonso during his rookie season has grown  into a thoughtful, mature person at the age of 34. The only Black driver in Formula One racing, he has taken a leadership role in the sport, asking his fellow drivers to take a knee before each race to show their solidarity with the global racial justice movement. Many of his fellow drivers have refused to participate. But he is setting a personal example with his actions, an example that the rest of us would do well to follow.