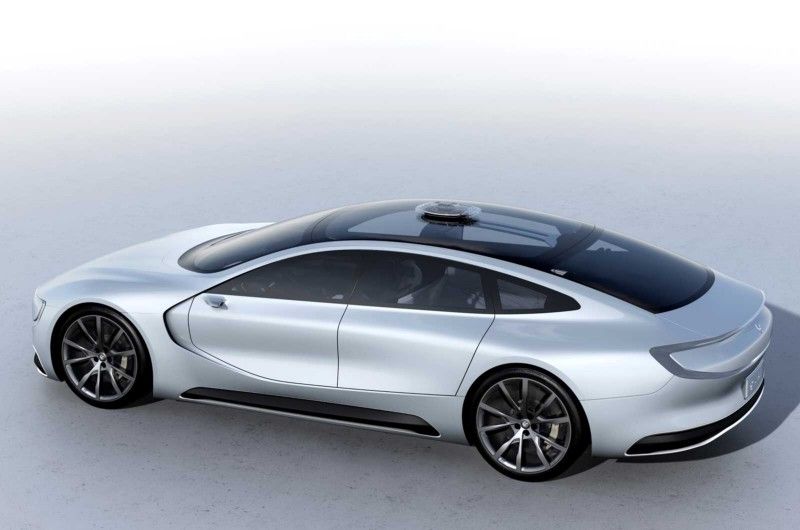 When it comes to the high end electric vehicle market, no one comes close to touching the success of the Tesla Motors Model S. The company has spread its wings into the popular crossover segment with the Model X, and it is now looking to go mainstream with the Model 3. Tesla may be giant now, but competitors are quickly catching up with viable EVs of their own. Take for example LeEco, the parent company of Faraday Future, and often referred to as China’s Netflix.

LeEco has vision of a high end EV with the unveiling of the LeSee ahead of its official debut at the Beijing Auto Show. The LeSee is being billed as a direct rival to the Model S and is not nearly as ambitious as the Faraday Future FFZero1. This concept car is supposed to give us an idea of the design direction for a production model that could arrive a few years down the road.

It has an electric powertrain and a steering wheel that retracts into the dashboard when the car is in autonomous mode. It sports more aggressive design than the LeCee, and has an external display that changes depending on the car’s status, from charging, to autonomous driving. LeEco executives also enthused about the car’s connected abilities,one of the key selling points of its planned range of electric vehicles.

LeEco’s wider business model includes mobile telecoms, digital entertainment content, and it plans to feature such expertise in its vehicles. The LeCee pro features an entertainment lounge that will use internet connectivity to access LeEco’s music, movies and work systems while on the move.

The company has strategic partnerships with US-based EV company Faraday Future as well as Aston Martin. LeEco were involved in the development of the Aston Martin RapidE concept, and LeEco CEO YT Jia is also a key financial backer of Faraday Future.

It has a top speed of 130 mph (210 km/h), suicide doors and a steering wheel that folds away when it’s not in use. The car is also offers separated areas for each of its passengers.

The car also makes use of a suicide door-layout, with the back doors opening from a rear hinge. The inside is full of LCD screens, while LeEco promises technologies including face recognition and self-learning capabilities, all of which further cement that this is definitely a concept.

The car’s steering wheel can retract into the dashboard when in autonomous mode, giving the driver more room to kick back and consume all of LeEco’s streaming entertainment content.

The car features an exterior light display that shifts between five different colors to signal what drive mode its in. Depending on the color, the car will inform drivers and pedestrians when the vehicle is driving autonomously, sees a hazard, is charging, or is car-share ready, LeEco says.Topped off with a glass roof, the four-door sedan does away with mirrors and instead uses cameras to monitor traffic approaching from behind.

Inside there are no buttons to control any of the supposedly high-tech features, but instead just a touch-sensitive screen in the centre of the dashboard. Bit like a Tesla, then.Most striking though are the back ‘seats’, if indeed you can refer to them such. Instead of resembling chairs, the rear passenger area features a stepped design where occupants can recline in comfort.