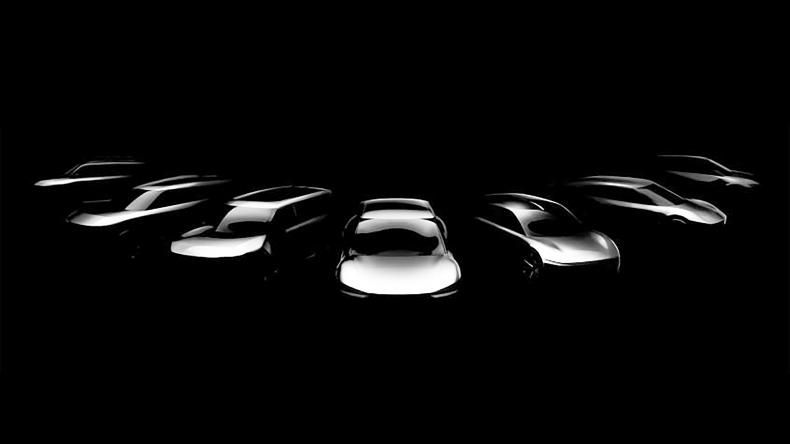 Kia Motors' president and CEO, Ho Sung Song, outlined the next six years of Kia's EV strategy at an event at the company's Hwasung plant in Korea, and the company is promising big things. Kia already offers three electric vehicles (the Niro, Optima, and Soul EVs) and two plug-in hybrids (variants of the Niro and Optima), but now they're promising seven dedicated battery-electric models by the end of 2027, with the first to debut in 2021.

Kia also revealed it is accelerating its efforts to become a "leading EV brand", kicking things off in 2021 with the launch of its first-ever dedicated battery electric vehicle (BEV), code-named CV. Kia’s planned line-up of EVs are previewed by this shadowy teaser image – and the range looks to be far-reaching, suggesting that a full-sized SUV, a family hatchback and what looks to be a rakish shooting brake estate are all in the pipeline. At the forefront of the teaser is the firm’s soon-to-be unveiled coupe-SUV, which is internally known as the CV.

Such a line-up would make Kia very well-placed to compete with the current largest electric vehicle brands, Tesla and Volkswagen. Both brands will soon corner the upper and lower ends of the market, with Tesla due to bolster its entry-level range with the Model Y and Volkswagen set to expand into the premium market with the ID.6 SUV.

While the company already has a couple of all-electric crossovers on sale in markets globally - Kia e-Niro and Kia e-Soul. However, both EVs have been derived from regular IC engined Niro and Soul respectively. The latest announcement reveals that the seven new EVs planned for launch by 2027 will be based on a dedicated all-electric platform. Accompanying the announcement is a sketch teasing these seven upcoming Kia EVs.

The first dedicated all-electric vehicle from Kia Motors will be unveiled in 2021. Known currently by its Kia CV codename, the electric vehicle will be underpinned by the Electric-Global Modular Platform (E-GMP) that has been developed specifically for EVs with one its primary focus being space maximization within the cabin. Kia has also revealed that the all-electric CV will debut its design language that will dictate the styling of upcoming cars from Kia. speaking of design, the exterior styling of the upcoming Kia CV electric vehicle will draw inspiration from the Imagine by Kia concept and the Future concept. The E-GMP platform won't just underpin the Kia CV EV, but a whole of EVs from the Hyundai Motor Group including the 45 and the Prophecy. Specifications aren't available at the moment but expect the Kia CV to have an overall range of around 500km and a fast charging time of under 20mins.

In addition the range of battery electric vehicles, Kia also plans to release a hydrogen fuel cell vehicle by 2025. No further information has been released yet, but sister company Hyundai currently produces the Nexo: a mid-size SUV with a 414-mile range.

Kia also aims to prop up electric vehicle infrastructure, in an effort to make its planned range of EVs more usable on a day-to-day basis. The firm is currently working on installing 2,400 chargers around Europe. In Korea, Kia says it will expand its chain of dedicated electric vehicle service centres to 1,200 by 2030.

The company’s CEO, Ho Sung Song, commented: “Kia has sold more than 100,000 BEVs worldwide since the introduction of our first mass-produced BEV in 2011 – the Kia Ray EV. Since then, we have started to introduce a range of new BEVs for global markets and announced plans to accelerate this process in the years ahead.”