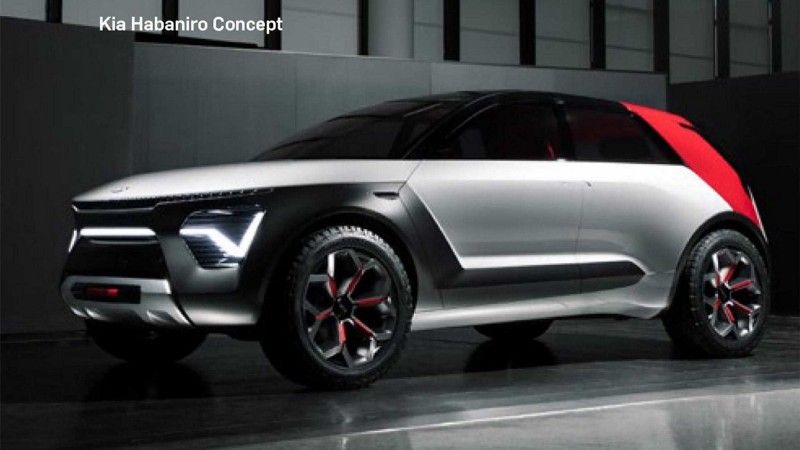 The Habaniro Concept is fully electric, however the new Niro will follow the current model in having electric, plug-in hybrid and petrol-electric hybrid variants.

The all-wheel-drive EV will have a range of over 300 miles although no details regarding battery size have been disclosed. Performance figures have also been kept under wraps for now.. It has seating for five and because of its butterfly doors, it should be easier to get in and out of the bright red interior. Because future, there are no actual knobs or buttons inside. Instead, the dash acts as a touch screen while the windshield has a heads up display, or in autonomous mode, the whole thing will become a video screen so you can watch videos.

The SUV uses bio-metric scanning to start the car and setup your personal profile. It’ll also monitor your vitals to adjust the driving experience. Hopefully, that doesn’t mean it’ll offer you all the power when you’re angry.

Measuring 4,430 mm long, the Habaniro Concept is 75 mm longer than the current Niro, while the wheelbase has also grown from 2,700 mm to 2,830 mm to increase space for passengers.The slimmer variation of the KIA ‘tiger nose’ grille on the Habaniro is expected to stay in place on the eventual production car, as are the heartbeat LED daytime running lights and bolder proportions.

Meanwhile, the dark grey cladding at the front and the ‘Lava Red’ highlights are expected to be toned down by the time the car hits showrooms.

The Habaniro Concept sits on 20-inch wheels, with butterfly doors similar to those on the BMW i3. However, Kia is expected to revert to a more conventional five-door setup on the production car.

The interior is far less representative of the car we’ll see in 2021: there are no buttons on the dashboard, while the interior is lined with bright red upholstery to match the exterior highlights.

Information is projected onto a head-up display that stretches across the width of the windscreen, while the dashboard acts as a digital instrument panel that responds to the driver’s touch using ‘Sensory Light Feedback’ technology.The climate control is similarly advanced, automatically distributing air throughout the interior as soft, ambient light in the floor helps create a relaxing environment inside.

The theme of passenger comfort continues with ‘Level 5’ autonomous capability, allowing the Habaniro Concept to drive itself as its occupants unwind.

So if you’re into puns, butterfly doors that go up and EVs, Kia’s got your back. But not really, it’s a concept car, you’ll never see this in your driveway which is kinda sad. Also, if we’ve learned anything from Tesla, wacky doors on a car regular people buy are not a good idea.