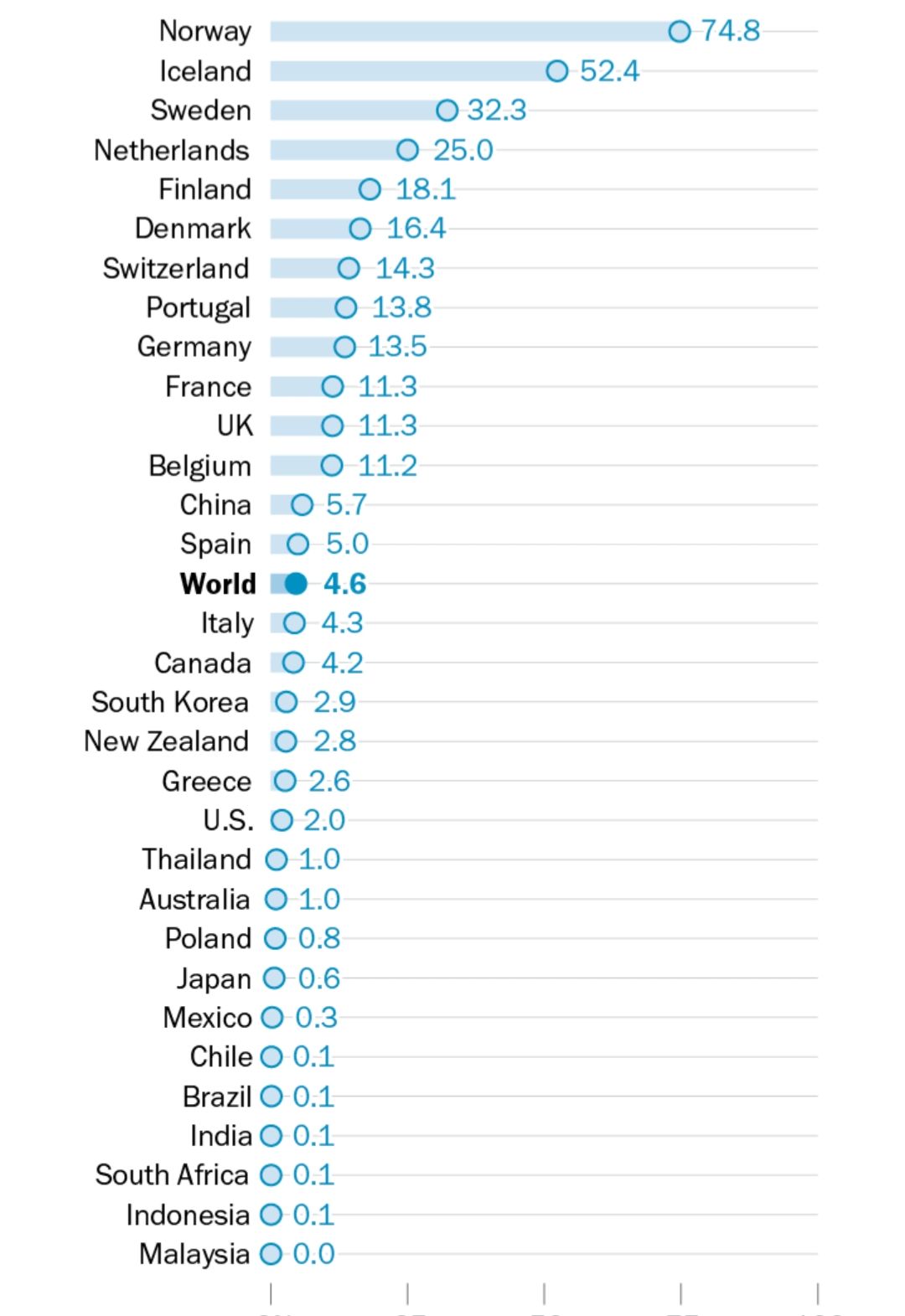 Electric vehicles are growing  with a small but significant number. The fastest growth in EV sales has been in Europe, a total annual growth rate since 2016- 2029 has been 60% a compound annual growth rate of 60% compared with China which has an increase of 36% and 17% in the United States.

Last year, nearly three-quarters of all cars sold in Norway and more than half of those sold in Iceland were electric these are the majority EV sales in the all  countries that are switching to electric transportation.

According to International Energy Agency(IEA) about 231,000 all electric vehicles were sold in 2020, down 3.2% from 2018. In each of the past three years, EVs accounted for about 2% of the U.S. new-car market. The COVID-19 pandemic may have affected vehicle sales of all types in 2020, making comparisons difficult.

China is the world’s largest market for electric vehicle (EV) sales, but it still has enormous room for growth. Beijing has set a target for EVs to account for 40% of all passenger vehicles sold in 2030, up from roughly 5% today. According to McKinsey, EVs were only 0.01% of the market between 2009 and 2012.

Geographically, the global electric vehicles market is segmented into North America, Europe, Asia-Pacific, Latin America, and the Middle East & Africa. In 2020, Asia-Pacific has the largest share of the global electric vehicles market by value and volume, followed by Europe and North America. The large share of this region is mainly attributed to the increasing demand for EVs and associated charging facilities, the growing number of electric mobility start-ups offering numerous solutions and services, growing government initiatives to develop charging infrastructure, and increasing incentive programs for promoting the adoption of EVs.

However, Europe is expected to register the highest CAGR by value during the forecast period. The high growth of this regional market is attributed to the stringent emission regulations set by the European Union, the countries’ increasing focus on reducing the number of conventional cars on the roads, and the extensive charging infrastructure networks in Europe.

‌ By volume, the electric vehicle market is expected to reach 233.9 million units by 2027, at a CAGR of 21.7% during the forecast period of 2020 to 2027. The growth of the electric vehicle market is mainly attributed to factors such as supportive government policies and regulations promoting the adoption of EVs, increasing investments by leading automotive OEMs, rising environmental concerns regarding automotive emissions, and the decreasing prices of batteries.

The Asia-Pacific region held the largest market share during the forecast period. The large share of the Asia-Pacific region is mainly attributed to the increasing demand for EVs and associated charging facilities, the rising number of electric mobility start-ups offering numerous solutions and services, growing government initiatives to develop charging infrastructure, and increasing incentive programs for promoting the adoption of EVs.

By volume, the E-scooters & bikes segment accounted for the largest share of the overall electric vehicles market in 2020. The large share of this segment is primarily attributed to the increasing government subsidies and support to promote electric mobility across the globe, increasing use of e-scooters & bikes in courier and e-commerce delivery applications, and growing demand for energy-efficient commuting.

However, the fuel cell electric vehicles segment is expected to grow at the highest CAGR during the forecast period. Major factors contributing to the high growth of this segment are the increasing demand for vehicles with low carbon emissions, strict carbon emission norms, a growing emphasis on the adoption of FCEVs due to their fast-refuelling capabilities, and increasing government initiatives and investments for developing fuel cell technology.

By power output,electric vehicles are gauged according to its power output, there are those with less than 100kW, 100kW to 250 kW, and more than 250 kW. In 2020, the less than 100kW segment accounted for the largest share of the overall electric vehicles market. The large share of this segment is majorly attributed to the increasing adoption of electric scooters and mopeds, increasing investments by government authorities in developing EV charging infrastructure, and favourable policies, incentives, and subsidies introduced by state-level authorities. However, the 100kW to 250 kW segment is expected to grow at the highest CAGR during the forecast period.