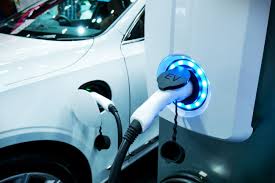 EV fires and how to solve them.

Every year, the International Energy Agency, collects data on trends within the automotive industry. The consumer demand speaks for itself, and it is clear to see, that EVs on our roads are here to stay. The batteries are getting more efficient and cheaper to manufacture, also the look and feel of the cars are increasingly attractive.

Consumers believe in supporting environmental ambitions and to reduce CO2-emissions from driving. All of these have contributed to the increasing sales and popularity of EVs. For now, EVs will be utilizing lithium-ion batteries. Mainly due to the fact that lithium-ion batteries are unparalleled in comparison to any other battery types on the market.

As the demand for electric vehicles keeps rising so is the concerns about electric fires and hence a need to know what causes them and what to be done to stop them. We are aware electric vehicles are powered by rechargeable lithium-ion batteries, which were invented in the 1990s and started powering EVs in early 2000.
If you compare electric cars and petrol and diesel vehicles that have been operational for over 100 years. Importantly, EVs are safer but, the main danger occurs when the lithium-ion battery is damaged  might happen if exposed to extreme heat or something which penetrates the battery cell wall.

Lithium -ion batteries are amazing because they store huge amount of energy in small space. However, when exposed to too much heat or if the heat penetrates to the cell case you get internal circuit which is called joule heating that is when electricity passing through causes heat and it hard to get rid of heat as fast as generating it. Because of the heat the chemical reaction takes place very fast, this process is called thermal runway  .

The battery in the Tesla Model S contains 7,104 lithium-ion battery cells in 16 modules. Each cell is made up of an anode, a cathode, a separator, and a liquid electrolyte. The anode and cathode store the lithium, and the electrolyte carries trillions of charged lithium ions back and forth through the separator. But the liquid electrolyte is flammable, and when a lithium-ion battery is exposed to extreme heat or is severely damaged following a crash, the result can be an internal short circuit, leading to a phenomenon known as a thermal runaway. That’s essentially an uncontrolled, cascading loop of violent chemical reactions that releases a tremendous amount of energy. According to a 2020 NTSB study of electric vehicle fires, most incidents are caused by the thermal runaway of a damaged battery.

In a damaged battery, “if you have a spark and some oxygen, it’s going to burn,” says Venkat Srinivasan, director of the Argonne Collaborative Center for Energy Storage Science (ACCESS) at the Argonne National Laboratory labs in Illinois. As the battery cells ignite and the thermal runway accelerates, the burning battery still has stored energy and can essentially create its own fuel, making it far harder to extinguish than a gasoline fire. “In gasoline, there’s one single reaction that occurs,” says Srinivasan. “In a battery, multiple steps take place, and it tends to take a long time to reach conclusion.”

“Lithium-ion technology is still relatively new,” says Joshua Lamb, a principal investigator at Sandia National Laboratories’ Battery Abuse Testing Laboratory. “What we don’t have with battery technology is the 100-plus years of dealing with them to know exactly what the hazards are.”

A fire extinguisher training for all electric vehicle manufacturers should be mandatory because putting out different kinds of fires requires different strategies, and a burning gas tank is not the same as burning lithium-ion battery cell pouches. The USFA ( Unites States Fire Administration) says EV fires can exceed 5000 degrees Fahrenheit and applying water or foam may cause a violent flareup as the water molecules separate into explosive hydrogen and oxygen gases. There are also risks of electric shock and toxic fumes in an electric vehicle fire that aren't present in gasoline fires, or at least not in the same way. So training first responders to safely put out an EV fire is important as the number of EVs increases in our roads.

It is important to design and conduct fire tests that can provide data to support the design of structures or materials and give data and insights on e.g. heat release as well as smoke generation.

Toxic gases are released in all kinds of fires. What makes the difference, is that some materials and products are of bigger concern than others. Many modern vehicles contain a large number of plastics, which is a potential source of toxic combustion material.

These fires will release carbon monoxide, organic irritants and carcinogenic organic compounds, further can some plastics be the source of such as  hydrogen chloride (HCl). A concern with lithium-ion batteries is the potential release of toxic gases for example hydrogen fluoride (HF). Toxic gases such as HF can be of great danger to first and second responders.

From a firefighter’s point of view

Tommy Carnebo, a firefighter based at the Södertörns fire department, is specialized in fires involving electric vehicles and hybrid vehicles. He uses his knowledge and experience to educate other firefighters and second responders on the topic throughout the Nordic Region.

“As firefighters, we know those car manufacturers improve their batteries every year. It means, we constantly must revise our response strategy. We must have the right information about the toxicity level, so we can use the right equipment and protection. It is therefore highly important that we conduct the tests continuously, so we know the risks we are dealing with”.

“What is special about EVs, is that the risk isn’t over when the fire is put out. If an EV has been involved in an accident, the car can re-ignite again hours, days, even weeks after the accident. If there is energy left in the battery and it is damaged, it is of great risk. That’s why we say that both first responders, second responders, and third responders should adequately be prepared to safely handle the EV after an accident.

The responders can be, for example, the car mechanic, who receives the car after the accident, or the professional clean-up team at the site of the fire. What most people do not know, is that a damaged battery will have to be in quarantine for 14 days, before it is safe to look at.”

The soot from a fire in an EV can contain large amounts of cobalt, nickel, and manganese compounds. These heavy metals can cause severe allergic reactions on unprotected skin. So, clean-up after an electrical car fire should be done by professionals with adequate protective gear.

While EVs may pose challenges for first responders during fires, experts say there’s no reason for consumers to be anymore concerned for their safety in an electric car than in a gasoline-powered vehicle.  According to Stephen Risser, a researcher at Battelle Institute in Columbus, Ohio, who studied about electric vehicle safety says there are hundreds of conventional car fires a day, compared with one every once in a while with an electric vehicle.

Consumers shouldn’t panic or shy away from buying EVs because of the fire risk, which is still relatively low, Risser said. They’re better off concentrating on aspects of the car that are likely to yield more safety, such as better crash-test ratings, he said.

You need water. It sounds obvious, but in any case, modern fire departments use foam or dry chemicals that are better than old-fashioned H20 at suppressing fire. While dry chemicals are great at putting down ordinary electrical fires, they may be ineffective with a fire stemming from a car's Lithium-ion battery.

Water is the best approach to a Lithium-ion fire. But that doesn't mean you should imitate a sprinkler and attempt to dose the whole fire by moving back and forth. You should keep a direct and focused stream on the battery until it relents. Also, don't touch the high voltage components or open up the battery. They're the most likely part of the battery to absorb heat.

i) Erik. O (2021) Electric vehicle fires are rare, but challenging to extinguish

iii) Sebastian .B (2020) In Case of Electric-Car Fire, Half of Fire Departments Are Unprepared