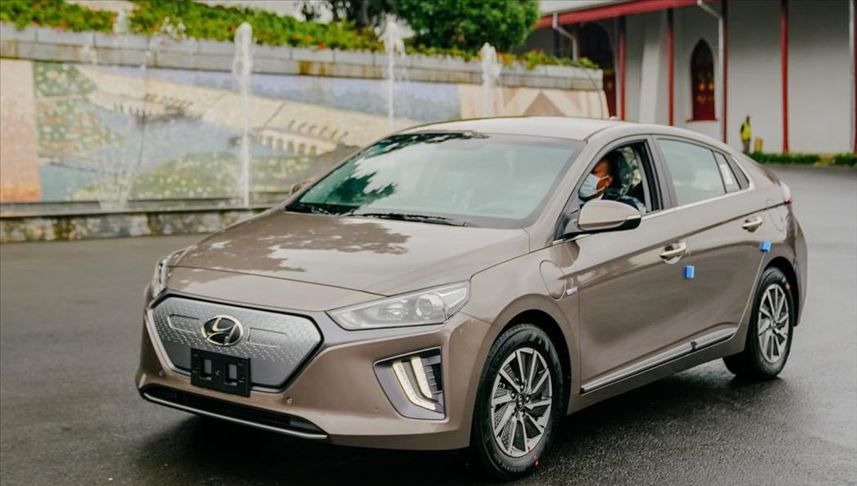 Ethiopia has unveiled a locally-assembled electric car from Marathon Motor, a joint venture between Korean auto giant Hyundai and Olympic champion Haile Gebrselassie. Electric cars are increasing in popularity thanks to companies like Tesla and legacy car manufacturers are starting to take them seriously. This has led them to come up with new electric cars, and most importantly ramp up production across the world.

The prime minister Abiv Ahmed said on twitter , the plan is to transform Ethiopia green and climate resilient aspiration into concrete action through the Green Legacy initiative and  Sheger and Entoto Parks, the PM received the car on Monday which is the first fully electric car to be assembled in Ethiopia. He also added that no emission can help reduce pollution.  The car was delivered by Mr Haile.

It is  exciting times for Ethiopia. Clean and renewable hydro-power dominates Ethiopia’s energy generation mix, contributing around 90% of the installed generation capacity. The electricity tariffs are also very favorable, with residential tariffs at around $0.06/kWh. Driving EVs in Africa is a whole lot cheaper than driving ICE. A study by AfricanEV reveals just how good driving the Hyundai Ioniq EV and several others can be in Ethiopia.

Last year, Ethiopians planted three billion trees as part of the greening and climate resilience initiative championed by the Prime Minister, with an additional four billion trees planted this year.

Ghana has not been left behind in the EV move, The Automotive Development Policy,The Ghana Automotive Development Policy provides the necessary framework to establish assembly and manufacturing capacity in Ghana,  has encouraged VW, Toyota and Nissan to  open assembling plant in the country.  The initial focus will be on new passenger cars, SUVs, and light commercial vehicles which would include pickups, minibuses, and cargo vans. VW Ghana’s new vehicle assembly plant has already started production in Accra’s North Industrial Area.

The plant will assemble ICE versions of the Tiguan and Tremont SUVs ,the Passat, Polo, and the Amarok pickup. They are targeting to produce around 5 000 vehicles in the first year, ramping up production based on demand.

The majority of vehicles sold in Ghana are used vehicles. Salvaged vehicles were also a popular segment. Importers brought in accident-damaged vehicles, fixed them up, and sold them in Ghana at prices that would be more affordable for consumers. As part of the measures to  encourage the local assembly industry, Ghana has now banned the import of salvaged vehicles. This ban kicks in this October. Ghana has also now capped the age of used vehicles that can be imported into Ghana at 10 years.