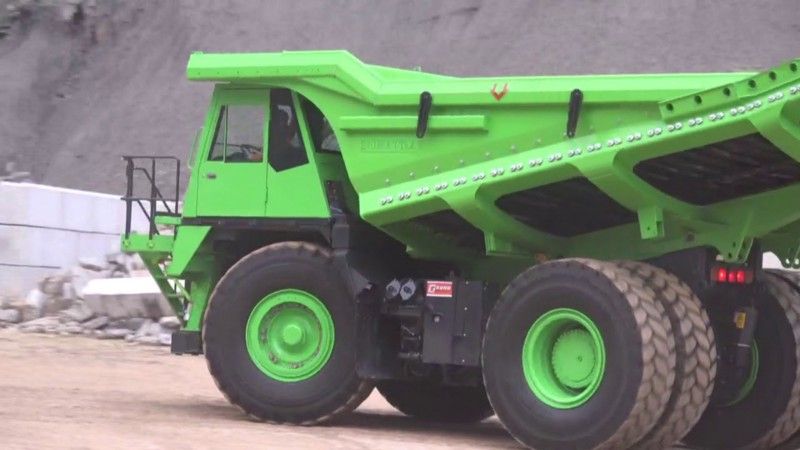 Meet the e-Dumper, an all-electric commercial truck meant to change the way that commercialized mining and quarry work is viewed. It might not set any land speed records, and certainly isn’t be best-looking vehicle on the market (among both the electrified or petrol-powered), but the notches on its belt signify function over form. This 100,000-pound truck towers above the ground, carrying nearly one-tenth of its weight in battery cells.

The e-Dumper stores the energy capacity of eight Tesla Model S 75Ds, It has a 5-ton battery pack making its total power reserve a staggering 600 kWh. To put that number into perspective, it’s as much power as the average home in the Mid-Atlantic region of the United States uses in an entire month.

If you are thinking of huge electricity consumption do not worry this truck isn’t going to consume a month’s worth of electricity every time it takes a trip up the mountain. In fact, this truck actually generates more electricity than it uses. No, this isn’t some weird perpetual motion machine, but instead uses physics to put regenerative braking as its main source of energy.

When the e-Dumper climbs to its destination, it consumes around 30 kWh of energy. But when descending the terrain, the previously-empty truck will now be hauling 120,000 pounds of rock. Thanks to regenerative braking, the e-Dumper actually generates a surplus of 10 kWh on its descent. Over the course of a day, the truck is expected to make around 20 trips, dumping not only rocks on its return but as much as 200 kWh of extra energy back into the grid. Regenerative braking means the heavier the load, the more electricity the dump truck can produce, saving 50,000 tons of fuel per machine per year.

Komatsu is no stranger to utilizing electric power plants in its trucks. The company has been releasing hybrid diesel-electric powerplants since as early as 2009, and automated commercial equipment for nearly as long. This particular concept, however, is a modified Komatsu dump truck being designed by heavy equipment manufacturer, Kuhn Schweiz, and a Swiss battery storage company called Lithium Storage.

More businesses are searching for hybrid, fuel cell, or pure electric vehicle alternatives which have increased longevity and decreased costs. The e-Dumper is a look at the very real possibilities of what is to come in the world of commercial vehicles.