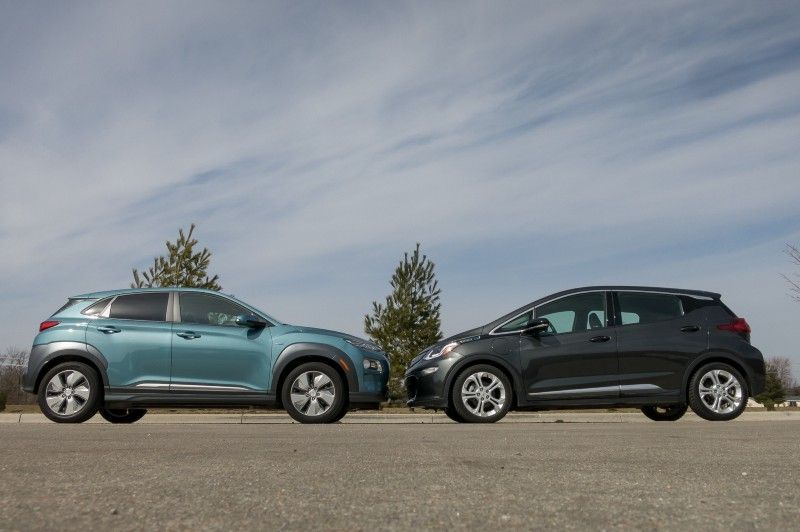 The Chevrolet Bolt EV and Hyundai Kona Electric are close contenders among mainstream electric vehicles. They’re similarly sized small tall-roofed four-door front-drive hatchbacks. Both run entirely on electric power with operating ranges in excess of 200 miles and can be reasonably fun to drive. The Bolt is offered in LT and Premier trim levels and starts at $37,495 including the destination charge. The Kona comes in SEL, Limited, and Ultimate Trims and starts at $37,995.

The Bolt comes wrapped in distinctive styling, with a stubby front end punctuated by LED headlamps that stretch upwards and into the front fenders, and a split faux grille that mimics those on other Chevrolet models. Sweeping lines run front-to-rear along the side, with LED taillights at the vehicle’s back end. It rides on 17-inch aluminum wheels.

The Kona features its own set of curves and creases in its bodywork, but doesn’t pretend to come capped with a front grille it doesn’t otherwise need. There’s narrow LED headlamps and running lights up front and LED taillights at the rear, with muscular wheel arches at all four corners. It features 17-inch alloy wheels.

The Chevrolet Bolt EV comes powered by a 60 kWh battery pack, and its electric motor generates 200 horsepower with 266 pound-feet of torque. That’s good for a 0–60 mph time of 6.5 seconds. It’s rated to run for an average 238 miles on a full charge, which takes 9.5 hours using a 240-volt Level 2 circuit. The Bolt is rated at 128/110 MPGe (the electric equivalent of a gas-powered car’s fuel economy) in city/highway driving.

The Kona Electric’s motor generates 201 horsepower, and though it has a stronger 290 pound-feet of torque, it’s a hair slower to reach 60 mph at 7.4 seconds. It gets the edge in operating range, however, with its 64.0 kWh battery pack delivering an average 258 miles on a full charge. As with the Bolt, that takes 9.5 hours via 240-volt service. It’s more energy efficient than the Bolt, however, at 132/108 MPGe.

The battery pack in the Bolt EV is covered under warranty for 8 years/100,000 miles, while the Kona Electric gets lifetime coverage.

While both cars leverage regenerative braking to harvest energy that would otherwise be lost through deceleration and braking, the Bolt lets a driver dial it up enough via a selectable mode to enable “one-pedal” driving. A driver can also enhance the regenerative braking function on the fly by easing off the accelerator and engaging a paddle on the back of the steering wheel.

Inside the Bolt, passengers face a dramatically sweeping dashboard design with a “floating” instrument panel. There’s a 10.2-inch touchscreen at the center of the dashboard for the Bolt’s infotainment system, which includes a Wi-Fi hotspot. Keyless entry/start is standard. Heated driver and front passenger seats, a heated leather-wrapped steering wheel, and an auto-dimming inside rearview mirror are optional on the Bolt LT and are included with the Premier version, which also adds heated rear seats. The Premier version can be upgraded with a Bose premium audio system, wireless device charging, and two USB charging ports for rear riders.

The Kona Electric is more conventional looking inside, with largely horizontal lines, a prominent center console, and a touchscreen display that’s flanked by analog buttons and knobs and sits atop the dashboard. Heated front seats are standard and they’re power operated and leather upholstered with the two higher trim levels. Push-button entry/start and the Apple CarPlay and Android Auto smartphone connectivity interfaces are standard. A premium Infinity audio system, navigation, and wireless device charging are optional on the Limited and Ultimate versions.

Interior room is similar with both models, though the Bolt has a bit roomier back seat. There’s 41.6 inches of legroom for front-seat riders and 36.5 inches for those in the rear. The Kona Electric’s cabin affords 41.5 inches of legroom up front and 33.4 inches in the back. The Bolt EV provides 16.9 cubic feet of cargo room with the rear seat backs upright, and 56.6 cubic feet with them folded flat. The Kona Electric has 19.2 cubic feet of cargo space behind the back seat, and 45.8 cubic feet with the cushions folded.

The Chevrolet Bolt offers several advanced safety features, but none of them are standard on the base model. Lane change alert with side blind zone alert, rear cross traffic alert, and rear park assist systems are optional on the LT, but they’re included with the Premier trim. Both versions can be upgraded with Low Speed Forward Automatic Braking with pedestrian detection, lane keep assist with lane departure warning, forward collision alert, adaptive headlamps, and a following distance indicator via the Driver Confidence II package. The Bolt also comes with a teen driver function that lets parents limit certain vehicle features and prevent certain safety systems from being switched off.

The Hyundai Kona Electric offers a modestly longer range on a charge and better energy efficiency than the Chevrolet Bolt EV, though the latter offers one-pedal driving capability. The Kona can be fitted with a few more features than the Bolt, but importantly comes with many of the latest accident avoidance features as standard equipment. It also includes an unlimited warranty on the battery. Bolt EV debuted for the 2017 model year while the Kona was introduced in 2019.