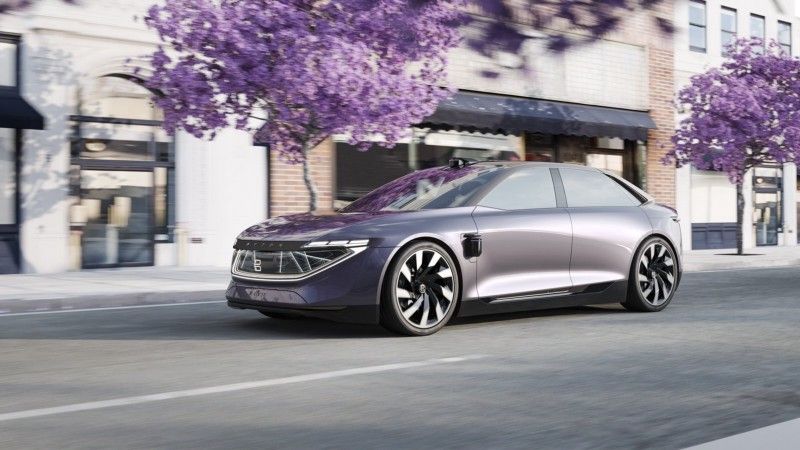 Chinese startup Byton is back in the headlines with its second concept vehicle, the K-Byte electric sedan. The sedan follows a similar blueprint than the SUV, which is now called the M-Byte. It’s being prepared as an all-electric vehicle that will feature, among other things, Level 4 autonomy. Byton’s goal is to have the K-Byte testing on the roads by the end of 2020 with an eye towards having them on sale by 2021.

Byton offered few specifics about the car, but pegged it as a ride of the future. In particular, the company says it wants the K-Byte to be a level 4 autonomous car, meaning it can handle all driving tasks in some but not all environments.

The idea of the K-Byte as an autonomous car makes sense, though. Byton says it’ll integrate the vehicle’s suite of sensors in a sleek way, including the bow-shaped handle looking-thing on top the car. Byton says that particular sensor provides a “panoramic scan of the vehicle’s surroundings.”

On the surface, it looks like what you’d expect a sedan to look like. The front section is a little all over the place but the tech and unconventional lighting fixtures give it a nice futuristic look. The grille, in particular, comes with smart surfaces that can create 3D visuals using unique light strips. The side profile is sleek in an understated way, and the rear end gets the stretched rear lights look, a staple among today’s concept cars. The overall profile is top quality, even if it comes with unorthodox protrusions.

The K-Byte Concept doesn’t hit its purpose. It may not look as smooth aesthetically, but you have to admire the company’s decision to put its cards on the table. The concept is, by and large, being touted with Level 4 autonomy. Byton doesn’t hide from its goal, and you can see it because the hardware for autonomous driving is integrated into the visual design of the concept. On the roof, there’s the LiBow system, which incorporates front and rear lidar to give a panoramic view of the car’s surroundings. Just below the side mirrors are the LiGuard side lidars, which, by the way, retracts when the car is parking or being driven manually by a driver. These liars also illuminate at night, creating a look that’s unlike anything we’ve seen from an autonomous driving concept.

K-Byte’s cabin has been designed with Level 4 autonomy in mind. No automaker would put a huge digital display in the middle of the steering wheel, at least as far as traditional cars are concerned. And yet, there it is in the K-Byte Concept. From the looks of it, that’s not only a digital display; that’s an iPad.

Of course, as big as that iPad is, it pales in comparison to the massive display that occupies pretty much the entire dashboard. No one’s going to get confused about its purpose, especially on a car that’s supposed to feature Level 4 autonomy.

Other notable elements of the K-Byte’s cabin is the lack of a central tunnel. That was done to help live up to Byton’s goal of creating a living space inside its cars, allowing drivers and passengers unprecedented freedom to go about their lives without having to worry about driving the car.

The rest of the interior comes with some traditional items, too. The seats look present-day makes. There’s a large panoramic sunroof, too, and the whole cabin is dressed up in quality premium materials.