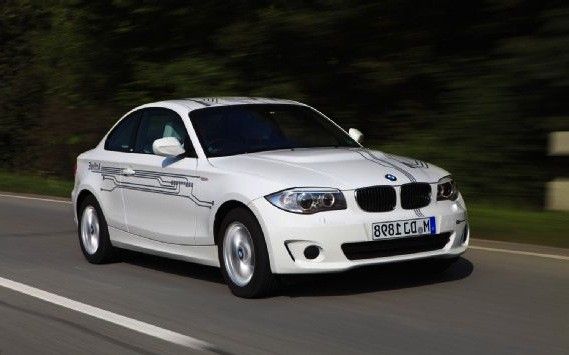 Powered by an electric motor, the ActiveE develops a total of 170 HP and 183 lb-ft of torque and will sprint from 0-60 mph in less than 9 seconds. The electric motor will take its power from newly developed lithium-ion batteries facilitating a vehicle range of around 100 miles in everyday driving.

The low mounting of the underfloor battery helps keep the ActiveE’s center of gravity at effectively the same height as that of a gas-powered 1-series. Additionally, positioning the front pack farther back in the engine bay and hanging the rear one at the extreme back of the car means that this electric car carries half its total weight on each axle. But of course it does. BMW is pretty obsessive about that.

Electrical energy to run the motor is provided by three separate banks of lithium ion batteries. Together they possess an overall capacity of 32kWh and provide a peak current of 400 AMPs. The battery cells is from a joint venture company created by Korean giant Samsung and German based electronics specialist Bosch called SB LiMotive.

Recharging is via a plug-in socket located behind the traditional tank flap. Using the 32 amp charger that BMW offers has part of the 1 Series Active E lease deal, it is claimed to take between four and five hours on a standard 240 volt mains. ActiveE has an all-steel body shell without any aluminium or carbon fibre. The standard rear bench seat has, however, been exchanged for the same pew as that used by the 1 Series M coupe, which is claimed to save 5 kg. Still, kerb weight is 1850 kg.

At a glance you will notice a bulge in the bonnet to accommodate the front mounted battery, a uniquely styled front bumper, spurious lack of tail pipes at the rear and a slightly higher ride height. While on the inside at the driver’s seat it feels just like that of series coupe until you hit the starter button , release the manual handbrake and flicker the gear leaver into drive then you will notice the difference between the two cars.

The 1 Series ActiveE accelerates to 37 mph which is equivalent to 60 km/h from standstil in 4.5 seconds with 62 mph that is 100 km/h coming up in 9 seconds. Top speed is limited to 87 mph to protect the charge of the battery. While the i3 has a range of up to 140 miles, the heavier 1 Series ActiveE can travel just 100 miles between recharging of its batteries.

To accumulate as much kinetic energy as possible while on the run, the ActiveE boasts an aggressive recuperation mode similar to that of the Mini E. When the driver backs away from the throttle the electric motor acts as a generator, providing sufficient levels of retardation that you rarely need to rely on more than a fleeting dab of the brakes, upgraded 300 mm discs at each corner, at around town speeds.

The high degree of deceleration is a little disconcerting at first, causing your head to rock forward as you enter a phase of trailing throttle. But it quickly becomes second nature to rely more the electric motor than the brakes when approaching a red light to ensure the battery charge and with it the overall range remains as high as possible. The trick to smooth progress in stop/start city traffic is a progressive action as you come off the throttle.

Getting underway is quite a process: insert the key into a dashboard slot, press the Engine Start button, unlock shifter, toggle it back to engage Drive. And after all that, the driver is rewarded with silence. Only the gauges indicate that the ActiveE is ready for launch.