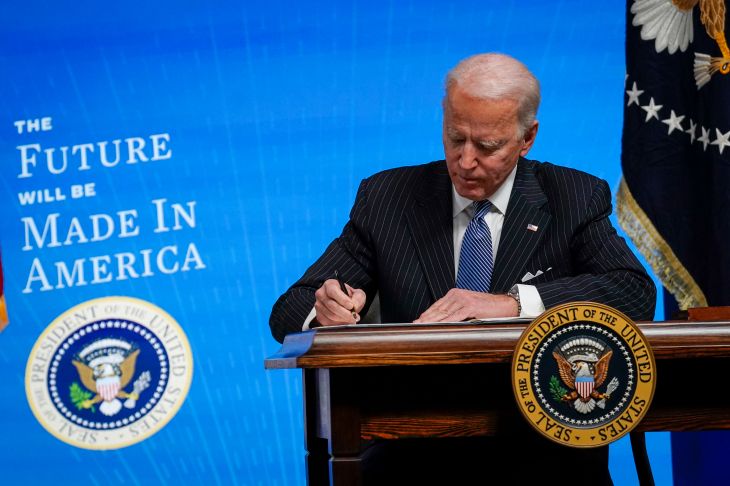 Biden to replace the entire federal fleet with electric vehicles

American president Joe Biden has announced plans to replace all federal government fleets with electric vehicles. His administration is embracing clean energy. When he was signing the "made in America" executive order, Biden said that The federal government also owns several fleets of vehicles, which we're going to replace with clean, electric cars made in America by the Americans. He added that this would help create millions of works for the American citizens.

According to the  2019 General Service administration report, the federal government owns a total of 645,000 cars.  225,000 belongs to the U.S Postal Service and more than 170,000 for military agencies.  Of the total vehicles owned, only 4,474 are electric, while the rest are ICEs. Biden did not give the timeline of when the replacement will take place.

The EV company's shares rose after the announcement, with Lordstown motors trading close to 20% higher and Workhorse group nearly 30% higher. The   "Made in America"  executive order was signed on Monday; the main goal is to see the federal government spending more money on American companies. The order essentially closes loopholes that allowed foreign products to be purchased, among other measures to boost American manufacturing.

Biden's push toward electric vehicles is in line with environmental goals and policies he campaigned on that contrast sharply with the previous administration's actions. Biden notably rejoined the international Paris climate agreement, which Donald Trump took the country out of, on his first day in office.

GSA (General Service Administration)  is committed to helping the government to achieve the fight against the climate crisis. With GSA managing close to 225,000 passenger vehicles to support the Government mission. The move to fight the climate crisis will be in partnership with the American automotive manufacturing industry to ensure the next generation vehicle is built in America.

However, the directive won't be straightforward because most federal vehicles are leased, which is a slow transition depending on the contract's length. The other obstacle includes charging infrastructure and supply. Biden supports union automotive jobs.

Tesla is one of the giant electric vehicle manufacturers in the U.S. Still, due to lack of union workers and high cost of vehicles, it could bar them from getting this opportunity to manufacture EVs for a federal state.
Ford and GM might not have a vast supply of electric vehicles now, but they do have union shops, and both automakers are investing heavily to expand their EV offerings.

Early this month launched a new business unit that will offer commercial customers an ecosystem of electricity and products as part of its $27 billion bid to become a leading EV automaker. The new business, called BrightDrop, will begin with two main products: an electric van called the EV600  has a range of 250 miles and a pod-like electric pallet dubbed EP1.

General Motors has plans to have 30 new electric cars in the global market in the next four years. Two-thirds of the vehicles to be launched will be available in North America, and every GM brand includes Cadillac, GMC, Chevrolet, and Buick.

Meanwhile, in November, Ford revealed a configurable all-electric cargo van called the E-Transit as part of its $11.5 billion investment in electrification. Ford has primarily focused its electrification efforts on the consumer market, notably the Mustang Mach-E. The E-Transit, built at its Kansas City Assembly Plant in Claycomo, Missouri, is aimed at the commercial sector.