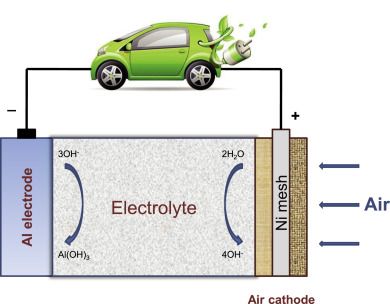 Al-air batteries date back to the 1960s, but they weren’t considered commercially viable due to concerns around the safety of their electrolyte composition. An engineer and former officer in the UK’s Royal Navy, by the name of Trevor Jackson, started doing experiments with these batteries in 2001, and the belief that aluminum-air batteries were potentially dangerous has taken a different path.
Aluminum-air batteries utilize aluminum alloy plates as the anode, a non-toxic, safe electrolyte like potassium hydroxide or even water, and air in the cathode with a catalyst, which can be silver-based.

The goal is for these batteries to be easy to replace as well, with the process of battery swapping taking about as long as it takes to fill a gas tank. The technology inside cars has changed dramatically in recent years. With potential innovations like aluminum-air batteries, the technology is on pace to continue changing. Even as vehicles change, though, insurance remains as important as ever.

Aluminum is the most abundant metal available globally and isn’t expensive or complex to recycle. On top of that, aluminum-air batteries have a good advantage in weight compared to lithium batteries. Aluminum, which you’re probably already aware of, is extremely lightweight, making it a choice for the anode. The oxygen used in the cathode doesn’t need to be stored since it’s pulled from the surrounding air. Because of these pros, the technology has been on the radar of some countries as a sustainable solution.

Because aluminum is a lightweight metal and the cathode material, oxygen, does not have to be stored in the battery, an aluminum-air battery is considerably lighter than a comparable lithium-ion battery. It is estimated that 55 lb (25 kg) of aluminum will provide a driving range of about 1000 mi (1600 km), and the entire battery will weigh about 200 lb (90 kg). By comparison, the Nissan Leaf’s 600-lb (270-kg) lithium-ion battery pack provides a driving range of about 100 mi (160 km).

It has a travel range similar to that of gasoline-powered cars. Its energy density is far higher than a lithium-ion battery. The battery pack is much lighter, opening a door to electric planes too. And aluminum is an inexpensive and abundant metal, unlike lithium. It requires battery swapping, not re-charging, so it faces infrastructure and logistical challenges. But that gets around the grid capacity issues faced by the growth of EVs. However, it lacks policy support, mainly because it’s not officially classed as a battery. With the right policy support and attention from automakers, it’s another technology that could become mainstream. Development continues.

The formula is quite simple: aluminium + air = power. A reaction of oxygen and aluminium in the air creates electricity and leads to a charge that can be used, for example, in passenger cars. ‘It’s halfway between a battery and a fuel cell. It takes the best bits of both.

Well, if you’re familiar with hydrogen fuel cells, this works in a similar way. Air is sucked into the cathode system containing a catalyst in order speed up a chemical reaction to separate the oxygen molecules from the air.

Oxygen is separated from the other components of air by the silver-based catalyst that blocks CO2 from entering into the battery, but it allows O2 to pass through to the electrolyte to react with water and produce negative hydroxide ions (OH-). At the anode, positive ions of oxygen (O+) react with aluminum, causing the formation of Aluminum Trihydroxide [Al(OH)3], which is a white powder, and electrons.  When the battery is connected to a load, like a light bulb, these electrons move from the anode to the cathode to give back the electrons lost during the chemical reaction.

The aluminum-air battery consists of an aluminum anode in an electrolyte solution of potassium hydroxide and uses oxygen from the air as the cathode. A selectively permeable membrane allows oxygen from the air to enter the cell but excludes gases such as carbon dioxide that would interfere with the battery’s function. When the battery is in use, the oxidation reaction of aluminum plus oxygen plus water produces aluminum hydroxide plus electrical energy (electrons).

It is a very safe and boring system. It quietly delivers the power constantly until the fuel is gone, unlike with a pre-charged battery where you have to cope with the loss of voltage as it discharges. This is a particular problem in electric aviation where full power is always required in case of aborted landings. This is why, rather than a battery, it’s more like an engine that uses fuel.  And right now, it costs between 29 and 35 euros per kWh for the manufacturer and 0.15 cents per kilometer for the driver.

i) Helena Uhde and Veronika Spurná (2021) Can Aluminium-air batteries outperform Li-ion for EVs?