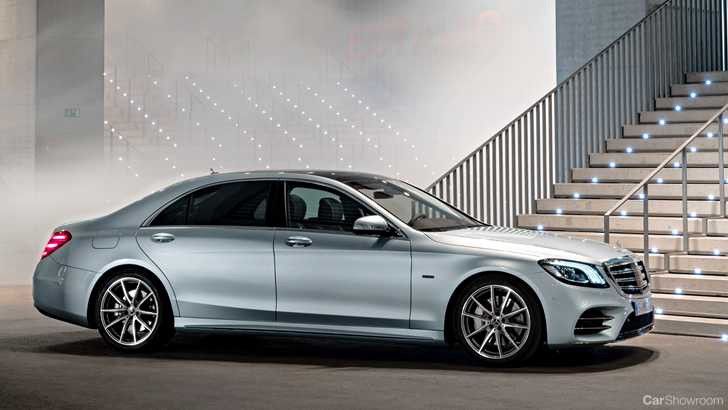 The EQS is expected to be powered by twin electric motors ,one on each axle giving permanent four-wheel drive. A similar set-up in the EQC delivers 402 bhp and 564 lb ft of torque. This set-up delivers more than 400 bhp and some 516 lb ft. A lithium-ion battery boasting a capacity of around 90 kWh is planned to provide a range of between 400 and 500 km (248–311 miles).

The spy shots also show that the EQS has a heavily raked windscreen compared with the C-Class, which combined with the shorter overhangs should give the model greater interior space. The roofline design of the latest CLS, although secrecy surrounds the rear of the new model, which was completely hidden on the prototype cars.

Although the production version of the EQC has now been revealed, deliveries of the first fully-electric Mercedes are not expected to begin until June 2019. The SUV has a kerb weight of 2425 kg and it will initially feature an 80 kWh lithium-ion battery,around 10 kWh less than the battery in the Jaguar I-Pace.

The EQ C is built at Mercedes’ factory in Bremen, Germany, while models for the Chinese market will be made at the factory owned by the joint venture between the firm and its Chinese partner Beijing Automotive in Beijing, China, in 2020. The EQ S is set to be built at Mercedes’ Sindelfingen factory in Stuttgart.

Although these are the only three EQ models( EQC, EQA, and EQS) confirmed to be going on sale by 2022, the firm has committed to 10 pure EVs in the longer term. According to well-placed sources within Mercedes, the second wave of EQ models is currently in the conceptual stages of design.

The EQS will be the first offering built on the new MEA2 platform and designed from the ground up to be electric. A sedan, it slots size-wise in between the S class and the E class, similar to today’s CLS. Because it doesn’t have to accommodate an antiquated internal combustion drivetrain, designers have more rein with which to sculpt it into the shape they want.

Though it will only launch in 2020, there is apparently already a heavily camouflaged prototype out testing. The car appears to have heavily raked windscreen, a low, short hood for good forward visibility and a long wheelbase about nine feet with short overhangs. The distance between the axles, each thought to be fitted with an electric motor, should allow for a spacious interior with, of course, no center hump to impinge on the foot space of back seat passengers. Indeed, there could be more room to groove inside than can even be found in the S class.

The rear of the car is shrouded in secrecy. At this point, it’s impossible to tell if it will feature a hatch on the back or a traditional trunk.