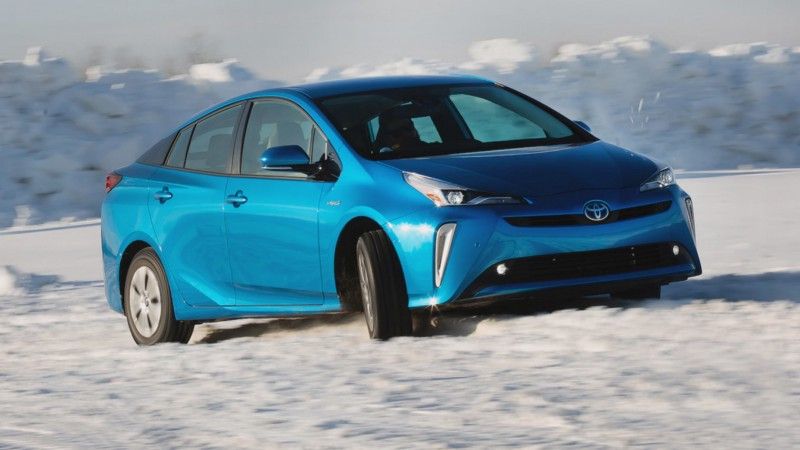 As efficient as it is, the Prius probably isn’t your first pick if you need a car that can navigate a snowy back road. You might have to rethink your assumptions, though. Toyota is introducing the 2019 Prius with an option for an electric all-wheel drive system (AWD-e in Toyota-speak). Choose the option and you’ll get a sedan that can muster a combined 50 MPG without losing its footing quite so quickly as front wheel drive cars. The system revolves around an independent electric motor that will always power the rear wheels up to 6 MPH, and can continue up to 43 MPH when necessary. It doesn’t need a center differential or front-to-rear driveshaft, either, and it won’t intrude into cargo space.

Another bold departure from the rest of the Prius lineup is the battery pack. It still resides below the rear seat, and as such affords the new 2019 Prius AWD-e model an identical 65.5 cubic feet of max cargo space, but it reverts to a nickel-metal hydride chemistry. Toyota cites excellent performance in cold weather as one reason for this change (RAV4 and Highlander Hybrids still use nickel-metal hydride; front-drive models continue with the lithium-ion technology). The battery pack is said to equal the lithium-ion battery’s energy storage capacity in a package that is 20 percent larger.

It is powered by two electric motors to achieve the same 121 horsepower and 105 lb-ft of torque. The rear electric motor is mechanically separate from the rest of the powertrain, and it is intended mostly to aid off-the-line traction. It is always active up to 6 mph, during which time it contributes an extra 7 horsepower and 41 lb-ft of its own.

Above that speed and until 43 mph, it will activate if wheel slippage is detected, and is completely idle after 43 mph. The upper speed limit for when the rear motor operates was chosen by Toyota’s engineers as a compromise between aiding the car’s capability in bad conditions and maximizing overall fuel economy.

With the extra weight of the rear motor , AWD-e cars are about 150 pounds heavier and less nimble than their FWD stablemates in normal driving conditions. Steering feel remains nothing exceptional but both versions of the Prius drive well enough and feel secure and stable for a typical day-to-day duty cycle. A nice touch is that the new electric motor does not impinge on cabin or cargo space.

Yet when we drove both variants of the Prius back-to-back on a snow course, the rear motor’s assistance is an obvious improvement. When started with tackling a steep, snowy incline, when you drive halfway up and come to a complete stop, then ascend the rest of the hill with the AWD system doing the work. While all four wheels clamored for traction, it crested the slope.

In the other exercises where the FWD was allowed to compete, all cars were fitted with the standard low-rolling-resistance tires, making for a proper A-B test. When we pushed both versions of the Prius through ess curves on a snowy track, the FWD car under-steered incessantly, the car pushing wide of intended line at all but the lowest speeds. Even with this native Californian and snow-driving novice behind the wheel, the AWD-e cars had no problem tracking true on this part of the course.

On the inside, a light revision includes substituting piano black plastic on the center console for the more outgoing white trim from before. Two additional USB 2.1 ports have been added, along with a Qi wireless phone-charging pad. The standard 4.2-inch infotainment display remains, though, and is one of the weakest points of the entire package. Its poor graphics and slow touchscreen responses can be partially remedied by upgrading to the Limited and its high-resolution 11.6-inch display.Android Auto and Apple CarPlay are still not available in Prius models. Toyota Safety Sense is standard and packs pedestrian detection, a collision warning and mitigation system, lane-departure assist, automatic high beams, and adaptive cruise control.