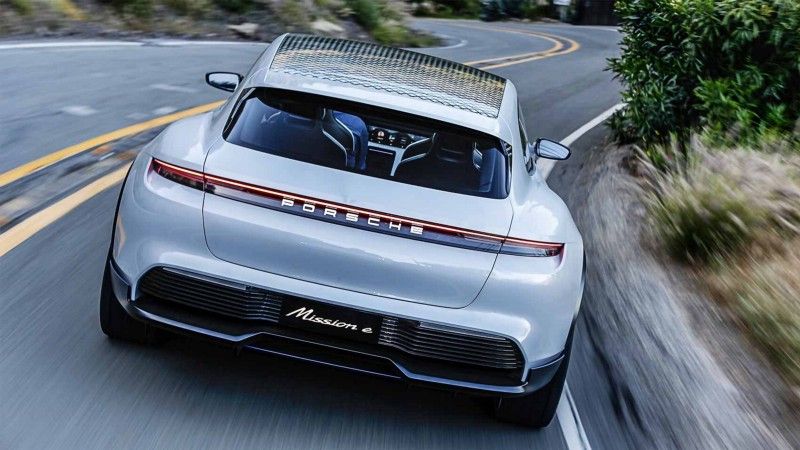 The Taycan, originally known as the Mission E, is a sporty four-door coupe powered exclusively by a battery electric system. It should be fast, too, with the company quoting a power figure north of 600 bhp and top range of 250 miles.

The Taycan takes the form of a four-door saloon, although its styling will incorporate coupe design cues such as a low roofline that gradually slopes downwards at the rear.The vehicle itself has appeared only in concept form or covered in testing camouflage.

Much like the current crop of battery-powered electric cars, the Taycan’s batteries will be located on the floor: underneath the driver and passengers. This gives the car an incredibly low centre of gravity, which improves handling, and opens up more room for occupants in the cabin.

Taycan will feature two electric motors, one powering each axle. They will produce up to 600 horsepower, according to Porsche. But Automobile Magazine has reported that the lineup could eventually include multiple variants with different power outputs. In addition to standard all-wheel drive, rear-wheel drive could be offered a little later in the production run. The list of extra-cost options will include a limited-slip rear differential. Anything is possible at this point — except an internal combustion engine, of course.

The Taycan will be all-electric, all the time. It will perform the benchmark 0-to-60-mph sprint in under 3.5 seconds in its fastest configuration. Top speed will be electronically limited to 155 mph. The battery pack stuffed under the passenger compartment will store enough electricity for about 300 miles of real-world range, according to Porsche’s estimates, and it will be compatible with Porsche’s novel 800-volt technology. Porsche is working with external suppliers like LG and Panasonic to develop the lithium-ion pack.

Porsche has also said the acceleration figure will be repeatable, time after time, as the battery goes down. Again, temperature management is critical since the battery uses liquid cooling, as most other EVs do. The Porsche, like the Tesla, will also need a battery conditioning interval. So to repeat 0–60 in the three-second range actually means waiting several minutes in between.

The car has multiple modes including Sport Plus that reconfigure its systems for when you want a blitz run.To keep the acceleration strong all the way to top speed, two-speed gearboxes will be used. The 918 decouples its front motor at speed; it’s conceivable the Mission E will have a two-speed box at the back and a decoupling clutch at the front. It’s fundamentally a rear-biased car anyway, as the rear motor is more powerful than the front.

Braking is going to be pretty amazing too. There is a computer blended braking where the pedal is effectively a request for retardation rather than a mechanical link to the discs. A computer works out whether to get that retardation from the discs or the motors.

Because the battery runs at 800 volts and can accept 350 kW of charge, the regen can be super-strong.Therefore at high speed it could actually invoke the rear ABS without even using the discs. And using the discs as little as possible makes it possible for Porsche to compete with its competitors.

Taycan’s battery can be charged from 0 — 80% in just 15 minutes, which is same if you fill up your gas tank and have a cup of coffee. The German EV’s charging speed is around double that of Tesla’s electric cars, according to the business news magazine. And the battery in Jaguar’s electric car takes roughly 45 minutes to top up to 80%.

The target is for the Porsche Taycan cover upwards of 310 miles on a single charge and Porsche says the 800-volt system can take on 62 miles of charge in just 4 minutes, or almost 250 miles in 15 minutes. Of course, these figures are entirely dependent on the availability of 350 kW CCS chargers compatible with Porsche’s 800 volt system.

To a Porsche lover, acceleration comes with a sweet noise (well, unless it’s a 718 Boxster or Cayman, maybe). But the Mission E won’t have an engine sound. Because no engine.

In the Porsche Taycan’s interior, a freestanding curved digital instrument displays sits directly ahead of the driver, as it did in the original concept. To the right is a small toggle-style gear selector for Drive, Neutral and Reverse. A large infotainment screen, much like the 10.1-inch unit used by Audi, sits flush within the vertical gloss finished panel that stretches across the fascia.

A second touchscreen sits in a sloped centre console between the front seats, making the cabin almost devoid of physical buttons. In the back sits a recessed foot well, which Porsche calls a ‘foot garage,’ made possible by the company’s decision to do away with the battery cells in the area.

Porsche’s engineers remain tight-lipped on exact driving range and battery size, but tell us to expect upwards of 310 miles on a single charge; fast charging at up to 350kW could add 180 miles of range in nine minutes.

The standout feature in the cabin is a large digital display behind the steering wheel. The panel is expected to come with a version of the Porsche Advanced Cockpit, where drivers can customize the layout of the car’s digital dashboard.

Drivers wanting to view the sat nav in the space between the car’s speedometer and rev counter can do so through the hi-tech feature, for example. Drivers can also change songs or radio stations using the dashboard-mounted panel, rather than looking over to the centre console-mounted infotainment system.

The Taycan appears to come with a number of buttons and switches on the steering wheel. This is a departure from Tesla’s approach to cabin design. The rival electric car maker’s interior controls are mostly located in one large touchscreen panel.