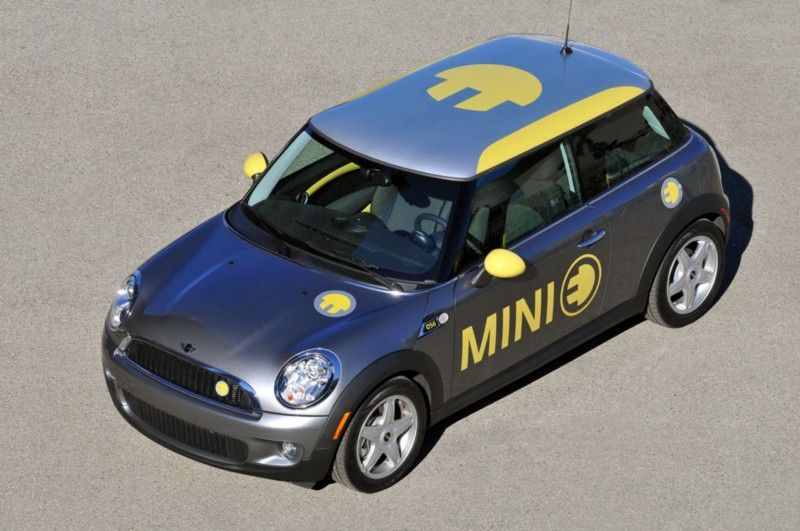 The Mini has gone electric. It’s a normal Mini but with an electric engine up front and a lithium ion battery where you would usually find the back seat. . The cars has 95 mph top speed meets 150-mile range and acceleration of 0–62 mph in 8.5 seconds meets 2.5 hours recharge time.This fully electric version of the Mini hatchback was built in 2008 as a trial to assess the popularity of electric cars.

BMW officially jumped on the electric car bandwagon with the 2008 announcement of the limited edition Mini E car for production. The 2010 Mini E — an all-electric version of the Mini Cooper — is capable of more than 100 miles on a charge, and boasts a 0 to 60 mph time of 8.5 seconds with a top speed of 95 miles per hour. These numbers fall short of specs for the standard MINI Cooper, but the Mini E will grant performance — especially acceleration from zero — much better than virtually all compacts or subcompacts currently on the road today.

Pretty good, with one major downside; the driving experience simply doesn’t last long enough. When travelling on trunk roads at a steady speed close to the speed limit, we found the battery could run out of spark after only 55 miles. Take in a bit of stop-start motoring and the brake regeneration kicks in, helping to increase the range massively but still well short of the 120 miles Mini claims.

The driving experience itself is pure Mini; the car feels quick, especially from a standing start and the handling is very close to that of the petrol Mini. That said, the extra weight (75kg more than a Cooper S) makes itself felt when you really chuck it around.

You start the engine by inserting the rounded key and pushing the starter button. The battery power gauge in front of you (replacing the usual Mini rev counter) jumps into action. The engine is primed and ready to go — but remains silent. The auto-style gear selector has a simple P-R-N-D single plane. Choose Drive, push the accelerator pedal and you’re away. You glide off in total silence apart from the distant whoosh of tyre noise and just a whisper of engine whine.

There is no gearshift or clutch to worry about. As electric engines have such wide torque bands — the Mini E’s engine cuts out at 12,500rpm and the effective torque band is all 12,500 of those revs — so there is no need for a stepped transmission. A single speed is perfectly adequate.

There are no gears. The electric motor doesn’t need their assistance. You just select either forward or reverse. There’s a regenerative braking system that dumps power back into the battery when you slow, and it causes deceleration so strong that you’ll hardly use the brakes in normal driving. The ESP has had to be tuned to accommodate it.

The drivetrain, which is very smooth, emits a pleasant whir when it’s cruising or accelerating, but it’s so silent at low speeds that you have to be careful not to run over pedestrians in supermarket car parks. They just don’t hear you coming.

Performance is impressive, especially below 60 mph. The car gets going really well, and can do 95 mph, though higher speeds chew battery power at an alarming rate. Cruise at 65 mph, restrain yourself under acceleration, and you’ll get 100 miles of range.

The interior is entirely familiar, except that the gearstick makes way for a simple PRND quadrant and a discreet meter that shows how much power you’re demanding under acceleration, and putting back through regenerative braking. It’s easy to get going; you just twist the key, wait for an array of lights to flash, select D and toe the accelerator.

Several things are quite different from an internal-combustion Mini, but you’ll get used to them in minutes. The step-off torque — 162lb ft of it — is available from standstill, so performance feels very strong.

The main drawbacks are the Mini E’s accommodation and weight; the net addition of the battery and electronic controls adds 300 kg and subtracts a back seat and most of the boot.

Although the ActiveE will cleverly package the power electronics to allow for a decent sized trunk, the Mega city is expected to be a four-seat, three-door hatchback — similar in size to a Honda Fit.