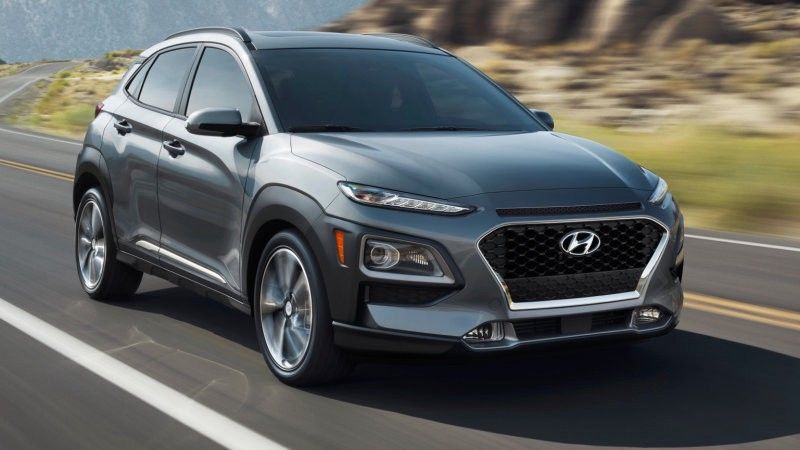 The powertrain components share the same specifications. The motors are rated for 201 horsepower (150 kilowatts) of output with a peak torque of 291 pound feet (395 Nm). Both have a battery pack energy capacity of 64 kWh using the same mostly flat shape (except for an extra stack of cells under the rear seat area). The Niro has slightly larger dimensions and thus gets slightly lower driving range. It is rated as 236 miles using South Korea’s test cycle was is closely based on the EPA cycle but can be slightly more pessimistic. The Kia up to 240 miles while Kona Electric is rated at 258 miles EPA.

The two, of course, are corporate cousins but their bond goes deeper than that. They are built on the same platform, albeit with battery cells from different suppliers — the Hyundai holds cells from LG Chem, while the Kia keeps rolling with help from SK Innovation. Regardless of this supplier deviation, though, they both boast a 64 kWh battery.

With a longer wheelbase and greater overall length than the Kona the Niro EV offers a little more rear legroom — about three inches extra. As a 6-footer, I didn’t find it uncomfortable to squeeze in behind an even taller driver. The Niro EV also boasts more luggage space than the Kona, with 18.5 cubic feet behind the rear seats, and 53 cubic feet with the seats folded down , quite impressive right?

There are some interesting differences. The charging port on the front of the Kona Electric is nicely illuminated, while on the Kia Niro EV, owners may be forced to pull out their phone flashlights for guidance. Similarly, the Kona has superior illumination in the parts of the cabin. Also, inside the passenger compartments, the consoles are laid out in a completely different fashion.

It’s quiet when you turn Niro on and begin to drive away, as you would expect. Listen carefully and you’ll hear the spacey hum of its pedestrian warning system at low speeds, which shuts off as you approach 20 miles per hour. From there, you’ll be able to hear the whine of the electric powertrain as you accelerate. There’s a little more noise than in the Kona, which apart from the looks is the first clue that the Niro EV is a little sportier feeling than its subdued sibling. Mash the throttle, and the Niro is happy to spin the front wheels with its 291 pound-feet of instant torque. It will push you back into your seat in a respectable 7.8-second 0–62 mph hustle, but it feels even quicker than the stated figure thanks to ample torque and linear acceleration.

The Niro EV offers four levels of regen feel, selectable from the paddles on the back of the steering wheel. The settings range from free coasting to nearly enough regen to allow for one pedal driving. You can hold the left paddle to bring the Niro to a stop if you’re committed to bypassing the brake pedal completely. There’s some creep when you take your foot off the brake at a stop, like a normal car, but if you brought the car to a standstill using the regen paddle, it’ll remain stationary until you get back on the accelerator.

Like the Kona, the Niro EV has Eco, Normal and Sport driving modes. Eco is already pretty responsive. It’s hard to make an EV like this feel sluggish with so much twist down low. Sport mode really sharpens the response from the right pedal. It gains and maintains speed with ease, and we found it easier to get excited behind the wheel of the Niro than the Kona EV. The longer wheelbase and low center of gravity make it feel stable and planted, whether rounding corners or aiming for a spot a mile down the highway. Even the slightly stiffer suspension provides more road feel, which means the Niro is a little chattier and slightly less relaxing than the Kona.

There are probably a number of reasons for the difference in the stated range between the all-electric Kona (258 miles) and Niro (239 miles), but the one that sticks out when comparing spec sheets is the final gear ratio for the two cars. The Kona Electric has a final gear ratio of 7.981:1, while the Niro EV’s is higher, at 8.206:1. This could also help explain why the Niro feels faster, torquier and generally sportier than the Kona. Weight could be another factor, as the slightly larger Niro EV (3,854 pounds) is heavier than the porkiest Kona Electric, which ranges from 3,715 to 3,836 pounds.