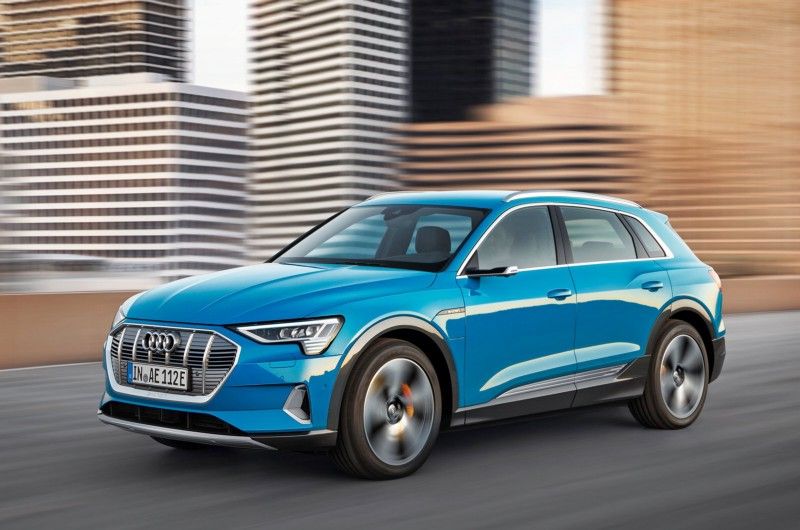 As we step into 2019, it’s a big year for electric cars,especially SUVs (that’s ‘sports utility vehicles’ if you’re not in the know). No longer will it be solely the brand name Tesla that spills from peoples’ lips. Sure, the American brand has been years in the business and its Model X is a relative success, but with the Brits getting aboard in 2018 with the Jaguar i-Pace, it’s now the turn of German marque Audi to put its oar in the electric pool with its all-electric e-tron.

The E-tron is powered by two electric motors placed on each set of wheels, giving the car four-wheel drive. The motors produce a combined 402 bhp, allowing the E-tron to cover the 0–62 mph sprint in less than six seconds and accelerate on to a top speed of 124 mph. The E-tron has a range of 249 miles on a single charge — that’s similar to the Mercedes’ EQC, but the I-Pace will take you around 40 miles up the road before needing to recharge.

In the Nissan Leaf has just 108 miles before needing to recharge, this was text done during the chilly conditions.As with other electric cars, too, extra energy is harvested from braking and coasting and fed back into the battery — Audi says this contributes to about 30% of the car’s range.

Air suspension and adaptive dampers come as standard, which should ensure a comfortable ride. This also plays a part when the E-tron goes off-road, with the car’s body rising by up to 50 mm for extra ground clearance. The electric Audi is capable of towing up to 1800 kg too.

If you’re charging the E-tron at home, expect a full charge to take around 8.5 hours, which can be halved by using an optional high-capacity charger. When using the fastest chargers available (150 kW) the E-tron can be charged up to 80% of capacity in 30 minutes.

Inside, the E-tron is familiar Audi territory, with the Virtual Cockpit replacing traditional dials and two touchscreens mounted on the centre console — the upper 10.1 inch screen runs Audi’s MMI infotainment system and displays things like the sat-nav, while the lower 8.6 inch screen is given over to climate controls.

Audi claims the E-tron will beat its SUV rivals in terms of both head and leg room for rear passengers. It’s certainly got the largest amount of storage space: its 660 litres comfortably outstrips the EQC and I-Pace, so a family-size load of suitcases should pose no trouble — that figure also includes the small boot at the front of the car where you’d normally find an engine.

The new electric luxury SUV sits between the existing Q5 and Q7 in Audi’s range, though sits lower to the ground than the Q5. As well as a bold look that separates it from other SUVs in Audi’s line-up, the E-tron features contrasting paintwork around its lower edges to emphasize its off-road prowess.

In a first for production cars, buyers can opt to remove the car’s door mirrors and replace them with cameras that feed into small screens inside, helping to make the car more aerodynamic. Other features designed to make the E-tron as slippery as possible through the air include special 19 inch alloy wheels and a smoother underside that also protects the battery from impacts.

E-tron is expected to cost around £71,000. At that price, the E-tron will be slightly more expensive than both the Jaguar I-Pace and the Mercedes EQC.